A draft order by Donald Trump to make all new federal buildings classical is the latest example of how traditional architecture is used to disguise racist agendas, says Phineas Harper.

Who could have predicted that a president famed for his eponymous sub-Miesian skyscrapers would come out as a classicist? Yet this week, news broke of a White House executive order to dictate a style for all US federal architecture – and that style is classicism.

Entitled Making Federal Buildings Beautiful Again, the draft order demands that "the classical architectural style shall be the preferred and default style" for all new government buildings. Dead good lobbying by Robert Stern? A dead-cat policy to distract from the surging Bernie Sanders? Or something more deadly?

The American Institute of Architects said it "strongly opposes uniform style mandates", but Trump's edict should be seen as part of a far more worrying agenda than a mere taste tussle. The order is not just about the look of buildings – it is part of a jingoistic culture war waged against black and ethnic minority Americans. Trump's order venerating classical aesthetics is intended to wrap the buildings of American authority not just in stone cladding but in the architectural shorthand of his core political project: white supremacy.

Of course, classical antiquity wasn't white. Ancient Greek architecture was hugely influenced by north African buildings, while the Roman empire stretched from Morocco to Iran. But for Trump and his supporters, these facts are irrelevant. Regardless of history, classical aesthetics have become a dog whistle for a certain pocket of nationalists – a code for whiteness.

I am a defender of traditional architecture, which has many strengths, in particular ecological. But it is no secret that toxic factions lurk at the sidelines of the traditionalist movement, in particular within classicism. It is not hard to see how Trump's executive order fits into an established pattern of mixing xenophobia with anti-modernist rhetoric. 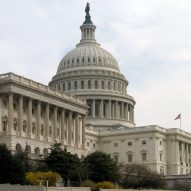 Take YouTuber Paul Joseph Watson, known for posting crackpot conspiracy theories and criticising Islam and feminism. What else does Watson care about? Alarmingly, the answer is architecture.

In 2018, Watson posted a film titled Why Modern Architecture SUCKS to his nearly two million subscribers, lambasting modernist urbanism and praising classical and other historic styles. For those sympathetic to the critiques of post-war city planning, it was chilling to see sensible arguments weaponised within a wider project clearly intended to stir paranoia and racial hatred.

Watson's films, like Trump's executive order, use architecture to divide the supposedly authentic inheritors of classical antiquity from the foreign modern other.

Watson is supported by Infowars, a site run by conspiracy theorist Alex Jones, who has argued that the 2012 Sandy Hook Elementary School shooting was a hoax orchestrated by left-wing lobbyists to increase political support for gun control. Jones and Watson are not the allies any decent person would want on their side in a debate about architectural style. Yet, in terms of the audiences they reach, they are among classical architecture's most powerful advocates.

Are traditional architects damned by the company they keep? It would be wrong to argue that all proponents of historic styles are complicit in Watson and Jones' hate-mongering, yet neither is it enough for us to shrug off the accusation that white supremacy has been allowed to fester within the traditional architecture movement.

In fact, this is nothing new. Traditional architecture has frequently been leveraged to support violent political agendas, for example, in justifying modernist housing estate demolition. Traditionalist housing campaigners like Alice Coleman did much to debilitate architecture's capacity to effect positive change by popularising a lie that modern architecture breeds social decay. Though utterly specious, this idea, like Trumpian climate denial, is hard to shake.

Through Coleman and others, enemies of social housing found an unholy alliance with architectural traditionalists who provided the intellectual scaffolding to justify many estate demolitions. Traditional architecture is for many now not associated with its core values of practicality, heritage and connecting people with place, but with the exact opposite – advocating brutal interventions in the name of taste and destroying whole communities' lifelines to their neighbourhoods.

Traditional architects have a responsibility to think and act more critically when it comes to how their work is used and abused by others. It is not acceptable that good arguments about building in vernacular forms, or with natural materials, are ever used to make the residents of modernist flats homeless or, even worse, habilitate white supremacy.

For too long, the fans of traditional architecture have ignored the darker side of our movement. For too long, we have allowed Watson, Jones and now Trump to hijack classical and other historic sympathies to push their political goals unchallenged. Where were the traditional architects, who speak so eloquently about respecting local communities, when the bulldozers came for the Heygate Estate, for example? Where are the ranks of classical architects now marching to American embassies around the world to protest Trump's co-option of their craft in his racist agenda?

Critical debate often degenerates to lazy comparisons with Nazi Germany, but it is no coincidence that the Third Reich also insisted on classical and traditional buildings. Like Trump, they too drew political popularity from vilifying minorities.

Deploying a classical architectural vocabulary was a propaganda tool intended to help mythologise an imagined white European volk while excluding Romani, Black and Jewish people. Seeing the White House's order in the light of that history is not just apt — it's essential.

In response to Trump's order, classical architects and the wider traditional architecture movement should refuse to allow the president to distort our values. We now need to become ferocious defenders of threatened communities, whatever style of housing they live in.

We need to debunk myths about modernism causing crime and social decay. We need to state loudly and clearly that when far-right conspiracy theorists talk about the value of classical proportions and traditional craft in the same breath as spewing racist, sexist hate, they do not speak for us.

Phineas Harper is chief curator of the Oslo Triennale, with Interrobang, and deputy director of the Architecture Foundation. He is author of the Architecture Sketchbook (2015) and People's History of Woodcraft Folk (2016). In 2015 he co-created Turncoats, a design-based debating society, which now has chapters in four continents.