PRTZN Architecture has used upholstered foam blocks to transform a tiny room in a Hungarian church into a children's playroom.

Commissioned by Sacred Heart Jesuit Church in Budapest, the room is used as a space for children to play during holy mass services.

Measuring just 12 square metres, the narrow space is filled wall-to-wall with modular foam blocks where the children can climb, sit and store their toys.

The room is located on the church's southern aisle and formerly served as just a storage area. It featured a high vaulted ceiling, black granite cladding and an uneven floor.

Budapest-based practice PRTZN Architecture was tasked with transforming the unwelcoming room into a child-friendly area that respects the church's existing architecture, lending the project its name of Play in Sacral Spaces.

"When we came into contact with the leadership of the church in 2018, the space had already been functioning as a playroom for one year, though it was furnished in quite an ad-hoc way with old, worn-out pieces of furniture," said Péter Müllner, who founded the practice in 2013 with Gergely Hory and Zoltán Major.

"The leadership commissioned us to enhance the quality of this space in order to serve the needs of its users better, and adapt it to the historic architectural environment of the church which opened in 1909."

The practice outlined three key issues that needed to be resolved. The first and greatest challenge was the room's narrow dimensions, while the second worry was that the existing cement tile floor did not provide adequate heat and comfort for a playroom. 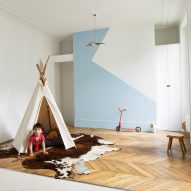 10 children's rooms that show the fun side of interior design

The third issue concerned the relationship between the building and the furnishings within the space – the studio felt that regular furniture would feel out-of-scale in an interior with such a high vaulted ceiling and narrow plan.

A modular foam "landscape" that covers the room's entire floor was created. Upholstered in different tones of red fabric, the squishy blocks can be stacked into different compositions to serve as both seating and storage, or create a continuous flat surface where the children can move freely.

"The intervention provided not only a new elevated floor level for kids to play, but the installation itself became a toy as well," said the practice. "At the same time, the interior of the church remained untouched."

The space is illuminated by circular lamps crafted from powder-coated aluminium sheets.

"We wanted to create indirect lighting for this space, with lamps gently blending into the existing architectural environment," the studio added.

"We also wanted to accommodate the form of the lamps with the curved geometry of the vaulted ceiling, which represent monumentality."

PRTZN Architecture is not the first studio to create a children's play area in an unorthodox building. In 2016 architect Yasutaka Yoshimura completed a kindergarten on the site of a disused warehouse in Japan.

It features a tent-like structure wrapped in a translucent membrane that recalls the shape of the original building.

Photography is by Balázs Danyi.