The stacks of trinkets challenge people to face their love of stuff said Committee, which is headed by artists Harry Richardson and Clare Page.

"If we don't declare honestly that humans love objects, fashion, novelty, beauty and visual pleasure then it seems unlikely to us that we will find sensible ways to fix our overconsumption," said Richardson and Page.

Committee created four Kebab Lamps, featuring an updated pleated fabric shade and stone base. The lamps will be presented as part of the Established & Sons Limited Edition collection at the the upcoming Nomad St Moritz art and design event.

Each lamp is a unique object made by stacking eclectic found objects on a central stem. The combined effect is intended to highlight the impact of mass production and our consumerist habits.

Committee told Dezeen that the original Kebab Lamps anticipated the adoption of the term anthropocene, which is used to describe how human beings are influencing the global environment. 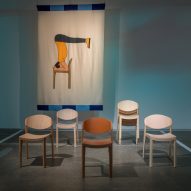 "Obviously, the lamps were no solution themselves to excessive consumerism, but they were not intended to be," the designers said.

"They were an illustration of it."

Rather than being purely critical of mass consumption, the products aim to fuel debate that could help address some of the issues associated with our dependence on producing and consuming.

"With the Kebab Lamps we wanted to show there is a joy in owning objects, as well as a cost," the designers added.

"Each lamp is a small, visual poem on globalisation; impressive and yet simultaneously 'too much'."

The process used to produce the Kebab Lamps today is much the same as when they were first developed in 2003.

Their creators said the main difference is the use of objects that they would perhaps have overlooked ten years ago.

Many of the objects are sourced from the "tat markets of south London," they said, "where we are confronted by the under-belly of retail, the wastage of globalised, mass consumerism".

The new pieces feature fabric shades that are made using traditional methods by a Danish manufacturer.

The crisp finishing on the pleated shades enhances their graphic aesthetic and the plain fabric creates a contrast with the maximalist assemblage of objects.

The new bases are made from stone offcuts that the designers selected from specialist supplier Diespeker to suit the aesthetic of each individual lamp.

Every lamp is unique, with Committee producing up to eight examples per year. Each piece has its own name and is carefully assembled to tell a story about various themes such as thought, power, civilisation, luxury and responsibility.

Established & Sons was founded in 2005, initially as a platform for promoting British design and manufacturing. It went on to work with international designers, including Konstantin Grcic and Ronan and Erwan Bouroullec. 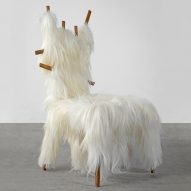 In 2017, one of the brands original co-founders, Sebastian Wrong, returned as design director and vowed to ensure its collection focuses on the founding principles of "artistry, freedom, ingenuity and a pursuit of the extraordinary".

Nomad St. Moritz takes place in the Swiss town of Samedan from 6-9 February 2020.