Industrial designer Lewis Power has won this year's rising star award at Stockholm Furniture & Light Fair, with a series of four objects born from an exploration of "material worth".

Comprising two lamps, a bowl and a vase, Power's debut Material Property collection was exhibited in the Greenhouse section of this year's Stockholm Furniture & Light Fair, which is taking place from 4 to 8 February in the Swedish capital.

The collection began as an exploration into three key areas of manufacturing that Power terms as craft, off the industrial shelf (OTIS), and mainstream.

To create each of the pieces, the designer asked himself, "how can a material go beyond lending itself to a form but owning it entirely?"

The panel also placed emphasis on the designer's interpretation of cast iron, a material usually associated with cooking vessels, deeming it "particularly inspiring".

When exploring the manufacturing area of craft, Power chose to create a lamp from cast iron due to its age-old process that reaps rough and raw-textured results with unique imperfections.

The Cast Lamp boasts a small stature, a tapered form and faceted body – qualities that the Northumbria School of Design graduate believed couldn't be afforded by any other material.

"The lamp's intention is to command its space like that of a bigger lamp, the material affords this – owning it," said Power, 25.

Further exploration of this medium was manifested in the Pool Bowl. Also made from cast iron, the dish is designed to hold small, common household objects such as keys.

Pool Bowl, which takes its shape from skateboarding bowls, has an overly deep container. The aim is to let items "sit quietly at the bottom without disrupting the beauty of the object, whilst allowing the vessel to stay dominant", according to the designer.

Power's exploration of the Off The Industry Shelf – or OTIS – manufacturing process saw him create a vase from pieces of borosilicate glass that are cut and joined together.

A cut-out section in the middle of the vase allows some of the shorter flowers on display to be seen from the side at a lower level, while the longer flowers are supported through the top. 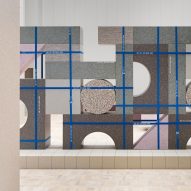 This is to encourage the user to place more emphasis on the flower arrangement when using the vase.

"The innovative design of simply cutting and bonding to create something not far removed from its former self surely owns its new form," the designer told Dezeen.

"The final vase allows grasses and blooms to display their beauty both through and beyond the glass," he added.

Based on the design of traditional task lamps, the Menaggio lamp was created as an exploration of the "mainstream" production method.

The best product award went to Massproductions for its lightweight and stackable outdoor sofa called Roadie, which was inspired by the welded steel crowd control barriers and aluminium lighting riggings that are assembled by "roadies" at concert events.

The best stand award was given to Scandinavian design company Vestre for "taking sustainability to a new level" with a stand comprised of elements that can all be reused.

Elsewhere at the 2020 edition of Stockholm Furniture & Light Fair, Note Design Studio created an installation for flooring manufacturer Tarkett built from stacked geometric shapes that are held together by lashing straps.