Note Design Studio has created an exhibition stand for flooring manufacturer Tarkett at Stockholm Furniture & Light Fair that will be taken apart and reused when the fair ends.

The installation, which explores how the circular economy could be applied to exhibition design, features stacked geometric shapes held together by straps.

The stand is intended to trigger discussion about "a sustainable, circular transition in society," the designers said.

"The materials used are either recycled or will be recycled and put back into the never-ending circular loop," they added.

Called Natural Bond, the installation features a sculptural room divider at its centre, placed in front of a table and benches.

Everything from the furniture to the towering columns around the perimeter is made up of smaller building blocks of cubes, cylinders and arches.

These shapes are clad in the French multinational's vinyl flooring called iQ, which can be recycled indefinitely.

The Natural Bond installation also features the newly launched iQ Natural, which is made not with fossil fuels but with a biomass derived from wood offcuts.

Once the installation is concluded, the material will be industrially washed, ground down and re-bonded in Tarkett’s facilities in southern Sweden. It will then be turned into new flooring of the same quality.

Natural Bond follows on from Note's previous collaboration with the brand for Milan design week in 2019, which saw the original iQ material turned into a series of decorative totem poles.

"There, the focus was on exploring different ways to use the material and the visual possibilities," said interior architect at Note Design Studio Daniel Heckscher.

"But this year we wanted the form of the installation to follow the function, to actually show how the material works from a sustainability perspective," he added.

"The straps, in a way, communicate the idea behind recycling that if you can bond something together, you can also de-bond it again."

Natural Bond also takes another step closer to circularity by designating entire sections of the installation for re-use.

These will be incorporated in installations in the years ahead – potentially at this year's Milan design week, where Note is designing the Swedish exhibition, or at the Swedish Institute in Paris.

"In the coming years, there will be more Tarkett installations not less," Heckscher told Dezeen. "So we needed to start thinking about not just how to create an installation but how to give it a second life."

Crucially, however, the key was also to figure out when the environmental strain associated with repurposing materials might outweigh the possible gains.

The large, surrounding pillars for example were originally meant to be reused, but a lifecycle analysis found that their transport and storage would entail a higher carbon expense than simply recycling the material.

Another carbon cost benefit calculation was also made for the parquet flooring on which the installation stands. It is made from the disused floor of a sports hall that was brought in from Norway, cleaned and cut into a new pattern. 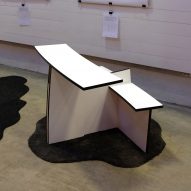 New Goodies but Oldies furniture collection made from old tables

"The alternative to using this recycled material is to plant an oak seed, wait 140 years for it to grow, water it, chop it down and then transport it," explained Tarkett's sustainability manager Dug Duberg.

"A log is basically 50 per cent water so you need to dry that water out until you have only about eight per cent left and then you have to cut it into pieces. There's a lot of effort involved in getting oak to this state, so I think it's worth the carbon expense of transporting it."

This is also justified by the fact that, after its time at the fair, the flooring will be re-used once again in Tarkett's office in northern Stockholm.

By decking out the installation in columns, arches and other shapes often associated with Ancient Greece, the team at Note hopes to visualise its intended role as a meeting place and forum to exchange ideas about the importance of creating sustainability by design.

"The idea of bonding, which is in the name, really works on three levels," said Heckscher.

"There is the visual bonding of objects with the straps, there is the actual material they are made from which can be taken apart and there is the bonding, the conversation we hope to encourage between suppliers, manufacturers, designers around this issue."

A series of products on show at this year's Stockholm Furniture & Light Fair also strived for circularity – from an outdoor sofa made of aluminium that was recycled from drinks cans, to a series of seats made from disused tables.

Note Design Studio also created the stand for Vestre at the fair.