New construction images of the Renzo Piano-designed Academy Museum of Motion Pictures have emerged, which actor Tom Hanks revealed at the Oscars will open this year.

Located on Wilshire Boulevard, the Academy Museum of Motion Pictures project comprises the renovation of the 1930s May Company Building, and a new glass sphere designed by the Italian architect's firm.

The images show the spherical addition nearing completion. It has a domed glass roof made of 1,500 flat, laminated, tempered, shingled glass panels that envelopes a basin made of steel and steel-reinforced-concrete.

The glass sheets are cut into 146 different shapes and sizes, and were fabricated in Steyr, Austria by Saint-Gobain.

The glass sphere will host a 1,000-seat theatre and a dome-covered terrace with views of the Hollywood Hills, while the majority of the exhibition and programming space will be housed in the 1930s May Company Building.

The Academy of Motion Pictures has confirmed it will now turn to the interior renovation following the boost of nearly reaching the $388 million (£299 million) target for the project.

"The Academy Museum recently announced that it has reached the 95 per cent mark in its $388 million pre-opening campaign, and installation of four floors of immersive, innovative exhibitions is now beginning," it said.

The updated May Company Building will be renamed the Saban Building after philanthropists Cheryl and Haim Saban, who donated $50 million (£38 million) to the project.

Changes to the existing structure include restoring the exterior with limestone from Austin, Texas. One-third of the 350,000 gold leaf mosaic tiles on the cylinder fronting the building will be replaced with tiles from the original Italian manufacturer.

"The building's design is inspired by the museum's mission to turn the dream factory inside out and give visitors unprecedented opportunities to peer behind the screen and into the creative, collaborative world of moviemaking," the museum added.

The 1,000-seat David Geffen Theater located inside the sphere building will be used for daily screenings and major movie events such as previews and openings. The design also includes the smaller, more intimate Ted Mann Theater, which will be equipped to host various film formats and multidimensional sound experience. 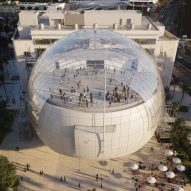 Other features of the project include a series of restaurants, shops and education spaces.

American actor Hanks, who is a museum trustee and co-chair of the Academy Museum campaign, revealed this week that it will open on 14 December – one year later than originally anticipated.

The firm's other projects in the US, include an apartment tower in Manhattan, the Whitney Museum of Art and a series of buildings for Columbia University's new Manhattanville campus in Harlem.

Photography is by Joshua White, courtesy of the Academy Museum Foundation.