London design duo Doshi Levien built a series of interconnected spaces resembling scaled-up versions of the models made in its studio for this year's Stockholm Furniture & Light Fair.

The practice, headed by Nipa Doshi and Jonathan Levien, designed the installation for the entrance hall at the Stockholm Furniture & Light Fair, which is dedicated to a different designer or studio each year as the chosen "guest of honour".

Doshi and Levien were given free rein to create a space that highlights aspects of their work and creates an interesting diversion for the thousands of exhibitors and guests passing through the hall.

Reproductions of the simple wood and cardboard models the duo make when developing products in their London studio were positioned across a series of model rooms connected by arched spaces and walkways.

Doshi and Levien discussed their collaborative creative process with Dezeen's editor-in-chief Marcus Fairs in a talk that was livestreamed from the fair. They aimed to give visitors an insight into this in the exhibit by displaying their drawings and mock ups alongside finished products for brands including Moroso, Kvadrat and B&B Italia.

"For us it's great because it's not often we see our work for the different brands all together," Doshi told Dezeen during a tour of the installation, adding, "I wish we had an apartment like this in London!"

The inspiration for the exhibition's design came from a visit to Palermo in Sicily, where the couple particularly enjoyed the alignment of spaces in a church called Chiesa di San Cataldo.

"As you move through the space you go from compressed, low ceilings to high, vaulted ceilings," Levien pointed out. "The spaces inside feel like a refuge, a place where people can come and experience a different world that is separate from the fair."

The simple timber framework is exposed externally and clad in thin plywood to create smooth surfaces inside. The materiality and construction is informed by the way the duo make prototypes in the studio.

"It's quite simply a scaled-up version of the models we make, using a wooden structure and a skin," said Levien. "By showing a contrast between prototype and object, we're asking people to dwell a little longer and look deeper into how something is made."

"We wanted to create a contrast in terms of the raw nature of the structure compared with the interior surfaces," Doshi added. "When you come to a fair like this everything is so refined and slick, so we wanted our exhibition to be a contrast to that."

Openings around the installation's perimeter contain one of the studio's latest fabrics for Danish brand Kvadrat. The open weave of the Maya fabric permits a partial view of what is going on outside, whilst creating a partition to separate the space from the bustling surroundings.

The installation is made entirely using Scandinavian wood to minimise transportation. The wood is left untreated and the structure can be easily disassembled and reused for future events. 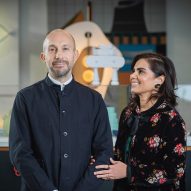 "We had to work with a clear conscious given that there's such an emphasis now on the need for sustainable material use," Levien explained.

After the fair, the wooden platforms will be repurposed for an upcoming boat show and the fabric will be returned to Kvadrat to be sold on to the local community in its home town of Ebeltoft.

The Stockholm Furniture & Light Fair has invited a leading designer or studio to create an installation for its entrance hall each year since 2004.

On the fair's 70th anniversary year, Doshi Levien was chosen because it has successfully demonstrated a thoughtful and imaginative approach to design for over a decade, creating multidisciplinary projects that exist at the intersection of cultures, technology, storytelling, industrial design and craftsmanship.

Levien comes from a manufacturing family in Scotland and trained as both a cabinetmaker and industrial designer. Doshi studied at the National Institute of Design in Delhi and her Indian heritage influences the studio's practice.

The pair met while studying at the Royal College of Art in the late 1990s. During the presentation streamed live from the fair by Dezeen, Doshi recalled being critical of Levien's work at the college, which laid the foundations for a relationship founded on "saying what we think and not having ego." 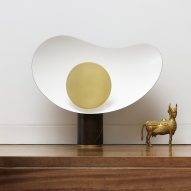 Now based in a 19th-century furniture factory in east London, the studio is known for playful designs such as the My Beautiful Backside sofa for Moroso that is designed to look as good from the back as from the front.

Examples include a furniture collection influenced by the architecture of Chandigarh in India, and a chair based on memories of a trip to the Himalayas.

One of their most recent projects is a self-produced collection of lights featuring sculptural surfaces made from solid and perforated aluminium.