Movie: in our next exclusive video interview for Moroso, designers Nipa Doshi and Jonathan Levien claim that the brand was one of the few furniture companies in Italy that would "dare" to invest in their work.

"I felt [Patrizia Moroso, the company's creative director,] was the one person in Italy who would understand our approach, who would be open to it," says Doshi in the movie, which was filmed at the Moroso Loves London exhibition during London Design Festival.

"She's very interested in mixing things together, making connections where traditional manufactures in Italy would not even dare go."

Doshi and Levien's work combines influences from their respective Indian and European backgrounds.

"Our approach is not a clean European industrial design approach," Doshi explains. "Especially for me, coming from India, it was harder to find companies that were interested in my approach."

The first collection the duo designed for Moroso was a series of daybeds called Charpoy featuring colourful embroidered Indian mattresses.

"When we met Patrizia we'd just finished an exhibition exploring the interplay between industrial design and Indian craftsmanship," Levien explains. "Part of that exhibition featured a low mattress with an Indian game of chess embroidered onto it. It was just exquisitely made by the seamsters in India and we turned it into our first collection for Moroso, which was launched in 2007."

Doshi says that the difference between Indian craftsmanship and Italian industrial production is not as big as it might seem.

"Moroso is also very much rooted in craftsmanship," she says. "If you look at the way pieces are upholstered, for example, it's still done by seamsters in the Moroso factory in Italy."

Doshi Levien's next collection for Moroso, the My Beautiful Backside range of sofas, was also heavily influenced by Doshi's Indian background. The design was based on a painting of a Maharani sitting on a palace floor and surrounded by cushions.

"In this piece we were really trying to create a very deconstructed sofa," Doshi says. "For us it was really important that no matter what angle you look at it from the sofa is poetic, it's sculptural."

However, the Indian influence is much more subtle in the duo's more recent collections for Moroso. 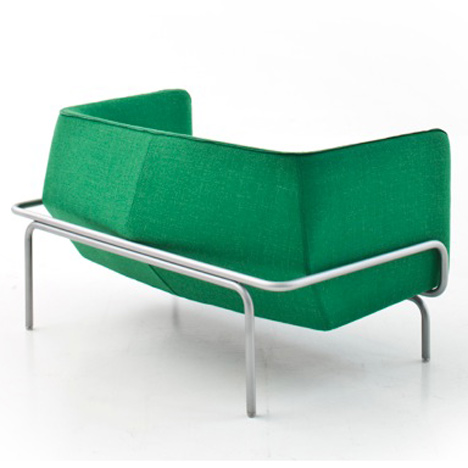 "We did Paper Planes [in 2010], which is a very industrial piece," Doshi says. "The Chandigarh sofa is really looking at the modernist architecture of Corbusier."

She concludes: "I think that over the year's we've done projects that really challenge people's perception of what our work is and also what it is possible to do with Moroso."

This movie was filmed at the Moroso Loves London exhibition at Moroso's London showroom on Rosebery Avenue and is part of a six-part series of exclusive video interviews with designers featured in the show.

You can watch all the movies below.