Make's St James's Market redevelopment, which includes a block with a ribbon-like stone and bronze facade and the restoration of a late 19th-century building, is featured in this video produced by Dezeen for the architecture studio.

The first phase of the scheme, as shown in the video, was completed in 2017. Make was recently given the go-ahead to start phase two of the redevelopment.

Make were commissioned by The Crown Estate and Oxford Properties to regenerate the historical site and create a new public destination.

The first phase of the project included two buildings, which, though notably different in style, complement one another with a shared material palette consisting of Portland stone and bronze detailing.

The roof was raised an extra 1.2 metres to accommodate a new ceiling, while an eight-storey glass wall was erected to connect the old frontage to the corner of the neighbouring building at 22 Regents Street. 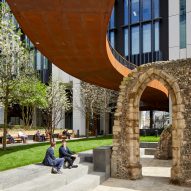 Suspended behind the lobby is a statement cantilever staircase, flooded by natural light from the roof and accented with bespoke lighting.

In contrast to the linearity of 1SJM, its counterpart 2 St James's Market takes a more organic form, with an oscillated exterior resembling a stack of horizontal bands.

The multi-purpose block, which is also referred to as 2SJM, was built from Portland stone to echo 1SJM.

Its facade is inlaid with strips of bronze to emphasise the curvature of the stone and nod to the 7.5-metre-high bronze shopfronts that occupy the ground floor of both buildings.

2SJM's upper floors are given over to column-less open plan office spaces with views across London.

The two buildings enclose a public square and sit within half an acre of pedestrianised public space that stretches from St Alban's Street to Norris Street.

British artist David Thorpe was commissioned to decorate one of the walls of the square created by the exterior of 1SJM with floral ceramic tiles.

East London architecture practice Studio Weave were brought in to design a pavilion that sits in the south-eastern corner of the square.

Make was founded by architect Ken Shuttleworth. The firm's previous projects include a pair of office buildings in the City of London with a series of pocket gardens, and the addition of 16 bronze escalators as part of a revamp of the entrance hall at London department store Harrods.

Photographs are by Make.