A large wind chime and a bouncy castle linked to a smartphone app are among the temporary Winter Stations structures that have been built on Toronto's lakefront, to encourage visitors to play outside in the freezing winter.

Built on Woodbine Beach, to the east of Downtown Toronto, the proposals are designed to respond to the theme Beyond the Five Senses.

"Winter Stations has always been about bringing joy, warmth and conversation to the long, cold Canadian winter landscape."

Among the designs is an orange-and-yellow mesh Mirage created by Spanish artists Cristina Vega and Pablo Losa Fontangordo. The see-through structure was influenced by the sunlight on the south-facing lakefront.

"Mirage has been designed to react to the movements of the sun and the people," the team said.

"Depending on where the visitors are positioned, they will see either a red transparent sun setting or a light and bright rising sun laying on the horizon. As they walk closer, they will discover the thin structure that makes these two simultaneous realities possible."

Called Kaleidoscope of the Senses, the geometric pavilion is based on an open bell tower that creates noisy sounds in the wind. A black chimney is placed at an angle, and designed to draw up the smell of oils that have been set into the beach sand below.

The studio has linked the design to a smartphone app for visitors to view an augmented reality of the installation. Users can see the stored files when viewing the Noodle Feed from their phones.

"Noodle Feed goes beyond physical senses and creates a shared augmented reality environment where people can interact in new ways and consider that the world is much more than we perceive," the studio said. 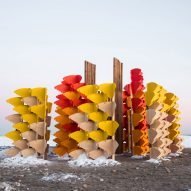 The final design for this year's Winter Stations are boxes of different sizes by students at Centennial College.  They are made from rectangular, stacked wooden prisms arranged in a circular shape around a steel drum. Graffiti artists are welcomed to tag the volumes.

Metal bells hang from strings and clamour in the breeze like a wind chime, giving it the name The Beach's Percussion Ensemble.

The designs are based on existing lifeguard stations on Lake Ontario, which have been turned into pieces of art. The installations are intended to motivate people in Toronto to visit the beach in the wintertime, despite bitterly cold conditions.

The four projects this year were selected from 273 proposals submitted by designers, architects and artists around the world.

Last year, Toronto's Winter Stations included four studio designs based on the theme of migration, as well as two installations made by students from Canadian universities Sheridan College and Humber College.

Photography is by Khristel Stecher.