Venetian office AMAA has converted an abandoned plumbing factory into an architecture studio with a rough-and-ready character.

AMAA founders Marcello Galiotto and Alessandra Rampazzo created their new workplace by inserting a steel-framed, two-storey glass volume inside the old factory in Arzignano, a town in the west of Italy's Veneto region.

The pair did all they could to preserve the building's industrial character. So not only did they leave the structure as intact as they could, they also designed their insertions to match.

New steel I-beams are just as rusty as the factory's ceiling framework, while poured concrete elements blend with the existing floor.

"We wanted to preserve the original structure as much as possible, in order to enhance the relationship with the past," they told Dezeen.

"We designed an independent box that seeks relationships with the geometries of the building's existing vaults and its materials: cement, steel, corrugated metal, glass, wood."

The new two-storey structure sits in the centre of the factory hall, set back from all of the walls, housing workspaces and a library. All of its walls are made from glass, ensuring that the space feels as light and open as it did before the renovation. 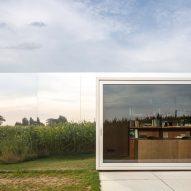 "Slender steel elements define the structural skeleton of the volume but also the perimeter of the window frames, which maintains a complete transparency between the existing space and the addition," said the architects.

The ground-floor space is slightly smaller, creating extra space for movement around its perimeter.

The upper level is around twice the size, so it cantilevers out towards the factory walls in all directions.

A sunken level, once used for pump testing, creates space for extra facilities below the main factory floor. Here, the AMMA team added a kitchen, a storage area and toilets, which are naturally lit by a skylight overhead.

Freestanding, poured-concrete staircases lead up and down to the levels above and below.

Galiotto and Rampazzo designed the studio in this way to show the potential in the industrial buildings that dominate northern Italy, many of which closed during the recession.

"These former industrial buildings are often demolished, but we wanted to value our heritage while contributing to the regeneration of the site," they explained.

Galiotto and Rampazzo founded AMAA in 2012, having previously worked with architects Massimo Carmassi and Sou Fujimoto. Their main office is in Venice, but this new studio will serve as an outpost.