Sebastian Wrong has created a collection of rugs called the Wrong Angle series, that are designed to be layered in interconnected grids to frame a floor or furniture item.

The four-piece "community of rugs", created for east London brand Floor_Story, features a repeated pattern of concentric squares that varies in scales and densities but maintains the same two-tone colour way.

Rather than just serving as a passive, pretty backdrop to a room, this allows them to be aligned and combined in different formations to work around the objects and structures in their environment.

"Many years ago, I visited a mosque in Turkey where they had loads of rugs covering the floor area under a central dome," Wrong told Dezeen.

"The rugs were layered and arranged in a very practical order filling the space and covering the stone floor. I wanted to expand on this idea by using a group of patterned grids that can be used in a similar way to define the room. I've not seen this done before, using a design system that is interlinked with a common pattern that can visually connect single units into an endless field."

Wrong picked the two-tone finish from opposite sides of the colour wheel, pairing petrol green with a brick red for maximum contrast. 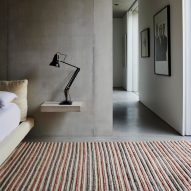 Seven of the best new rugs around

The rugs themselves are hand-woven in wool, with a low density of 20 knots per square inch to create a lived-in feel.

"The woven surface is shaved so that the colours and tones become more blended and subtle," the designer explained.

"The effect is super subtle and draws your eye into the frame. I wanted these rugs to be softly graphic rather than obviously contemporary, and the combination of the rectangular borders and connecting colour fades has a classic, timeless appearance."

Wrong was a co-founder of British brand Established & Sons, for which he created seminal designs like the Front Clock before leaving in 2012 to pursue solo projects including a collection for Hay.

Since rejoining the company in 2017 as design director, he has presided over collaborations with Ronan and Erwan Bouroullec and Konstantin Grcic, as well as and a collection of office furniture.