Established & Sons' first furniture collection since the return of brand co-founder Sebastian Wrong features a sofa that can be flat-packed and a bouncing light.

Ahead of Milan design week next month, Wrong has unveiled a series of five new pieces that the British brand will debut at the furniture fair.

The set – which counts Ronan and Erwan Bouroullec, and Konstantin Grcic among its contributors – also includes a chair first designed in the 1970s, lighting pendants that look like sweets and a sofa with a "big personality".

"The primary focus for this collection was to create something accessible, competitively priced and ready to go straight away," Wrong told Dezeen during a press preview in London yesterday.

"It is a small collection but it really focuses on key areas, to build up a foundation for us to grow on," he said.

Wrong was one of five co-founders of Established & Sons but left in 2012 to focus on new ventures.

Following a five-year hiatus, which saw him launch lighting company Wrong London and collaborate with Danish brand Hay, he returned to the brand last year as design director. This is his first collection since rejoining.

"Established has got a huge part of me in it, more so than I ever realised until years later," Wrong explained. "The opportunity to come back into the company was a really great opportunity to pick up from where I left off."

Wrong designed one of the products himself. The Filigrana Light is a glass pendant light, featuring a decorative striped pattern reminiscent of boiled sweets and an acid-etched surface that diffuses light.

The product is handmade, using a Venetian glazing technique that involves rolling in strips of coloured glass. It comes in four different shapes and a choice of five colours.

For the Barbican sofa, Wrong enlisted German designer Konstantin Grcic. Designed as a "modern update on the traditional chaise and corner sofa", it features a simple base wrapped in Kvadrat's speckled Galaxy fabric, plus contrasting cushions for the seat and backrest.

"Blocky, charming, clean, it's really comfortable and it's very versatile," said Wrong. "We're using these simple textiles to really bring it out."

The Bouroullec brothers have also designed a sofa for the collection. Called Cassette, their design pairs a powder-coated steel frame with wooden details and tactile upholstery. One of its biggest assets is that it can be flat-packed.

"It has a very simple but beautiful construction – it's very honest," said Wrong.

The collection also includes a chair designed by 88-year-old Italian designer Mauro Pasquinelli back in 1976. Only one prototype was ever made, but it never went into production as it would have been too expensive at the time.

However Wrong spotted the design and set about bringing it to market for the first time. Available in either European oak or solid ash, with an optional leather covering, the Mauro Chair is constructed using the latest CNC technology.

"We need a product like this in the collection," said Wrong. "A sensible chair, a comfortable chair, a stacking chair – it's got a lot of character."

"To revive something of a different era, and to reengage it with modern manufacturing processes and opportunities, I think, is a very Established thing to do," he added. "We're taking a risk by using something which has quite clearly historical references to it. But yet it has a very beautiful charm, a very pure formal language, which I think fits the company's character."

The final piece in the range delivers on Wrong's promise to give a platform to younger designers. Created by Swiss product designer Dimitri Bähler, Light Light is a tall floor lamp that moves when touched.

Traditional Japanese Washi paper creates a textured sphere around the LED bulb. Meanwhile, a six-millimetre thick carbon-fibre rod and a weighted base make it possible for this glowing sphere to bounce back and forth.

To accompany the collection, Spanish graphic designer Albert Tercero has created a series of stylised illustrations, one for each piece. Wrong hopes this will help the brand to build its new identity. 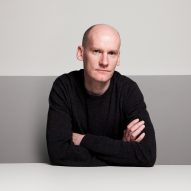 Wrong plans to roll out more new products over the course of the year, to ensure the brand maintains momentum.

"Established & Sons will always be a leading, inspiring brand. The difference now is that we have all grown up," he said.

"Now it's more about hitting the ground running, understanding exactly where this brand is today, how it will shape up, and what its identity will be in the future," he added. "We've got strong products from strong designers with strong stories, and that has to be one of our core principles going forward."