A total of 103 homes will be built behind the brick facades.

Dramatic brick archways will form a colonnade along the ground floor, reflected back in a water feature in a central courtyard. White-washed vaulted communal spaces will feature at the entrance.

Arches will also feature at the top of a multi-storey block of apartments that will have a row of recessed balconies.

"It will reveal itself slowly as you move around and through it."

Designed for developer Argent, the 103 homes will be a combination of studios, and one, two and three bedroom apartments.

Conran and Partners, the architecture firm that recently converted Centre Point tower into housing, will be designing the interiors for 53 of the Cadence homes.

Small homes developer Pocket Living will be managing the other 60 units in the development, renting them out to local workers on middle incomes.

Cadence, which is due to complete in 2022, will be located in London King's Cross area, close to the Thomas Heatherwick-designed shopping centre Coal Drops Yard. 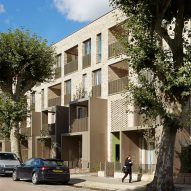 A large swathe of land behind the King's Cross railway station is under redevelopment. Victorian gas holders have been turned into housing by WilkinsonEyre, and both Facebook and Google are building office blocks.

Alison Brooks founded her eponymous architecture studio in 1996 The studio was a finalist for the Mies van der Rohe Award for a development of 44 homes that is part of the  South Kilburn Estate Regeneration Masterplan.