Danish designer Mads Odgård stripped away anything unnecessary when creating this series of minimal lamps for Carl Hansen & Son, which feature hemispherical shades that intersect with simple metal tubes.

The MO Series lighting collection began life as a personal project for Odgård, who couldn't find a suitable lamp to use at his summer house in Sweden.

During a presentation at Carl Hansen & Son's Stockholm showroom, Odgård explained that the first prototype was made by combining a salad bowl from Ikea with the inner cardboard tube from a toilet roll.

"I didn't set out to design a lamp for a certain company, I was just looking to create a lamp I liked that gives me a sense of security when I see it," he said.

Asked why he associates the design with security Odgård added: "When you see a lamp it gives you a feeling of comfort, wherever you are. If you're in a Swedish forest or a hotel room, even if it is turned off you know you can switch it on when it gets dark."

This theory about safety comes from a research project Odgård completed in collaboration with Aalborg University and the Technical University of Denmark that examined the psychology of light.

The two main shapes that are repeated throughout the collection are a hemisphere and a cylinder. According to Odgård's research, using a sphere or part of a sphere was essential as it connects the design to nature. 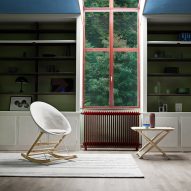 "As the sun rises above the horizon, it starts spreading a small dome of light, which then grows into a hemisphere and later a sphere," he said.

"The reason why we're uncomfortable with fluorescent tubes is that they're not spherical. It just doesn't fit with our consciousness."

The wall, table and floor versions of the lamp each feature a cylinder that extends through the socket to lend them a feeling of stability. The pendant version incorporates a slender cylinder that adds weight so it will always hang straight.

Odgård consistently strives for simplicity in his work, following a similar philosophy to Danish masters like Hans J Wegner and Børge Mogensen who preceded him as students at Copenhagen's School of Arts and Crafts.

"When I've completed a sketch, I take a good look at it and see if there's anything I could do without," said the designer of his approach, which is evident in the MO Series.

Speaking about the risks involved in creating something with such a simple and understated form, the designer added: "It takes a lot of courage for the producer to say that if we market it in the right way we can show that we dare to do something very simple."

At the showroom launch, organised to coincide with last week's Stockholm Furniture & Light Fair, he explained why the company has chosen to offer lighting and other products alongside the furniture it is best-known for. 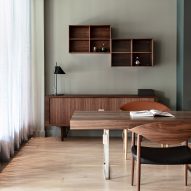 "A lot of architects today are pressed for time, so we need to be able to deliver furniture, lighting, rugs, so we can decorate a whole interior," Hansen told Dezeen.

"We are becoming more a lifestyle company with a couple of factories," he added. "With the way web trade is today, people are looking for so many things and they want it all in one package."

Under Knud Erik's stewardship the company has grown from around 17 employees in 2002 to almost 400 today. It releases a small number of new products each year, such as the foldable rocking chair it launched in 2017.

The company has also reissued lesser known pieces from its archives over recent years, including the lightweight PK1 dining chair by Paul Kjærholm and the CH23 chair by Hans J Wegner, who first partnered with the company in 1949.