Dezeen promotion: UK manufacturer Forbo has designed vinyl tiles to resemble the parquet floor of a school gymnasium, which has been taken up and rearranged to create abstract patterns.

The tiles, which feature an aged wood profile that is finished with a series of colour blocks, are part of Forbo's newly expanded Allura range. These suggest former court markings on the floor that have been chopped up into separate geometric shapes in the process of being reclaimed.

Each tile features a different selection of colour blocks, and can be arranged to form bespoke patterns to accentuate different spaces.

Beyond the reclaimed gym floor design, the Allura range includes 120 other vinyl flooring patterns that can be endlessly mixed and matched.

They range from solid colours such as coral and azur blue to different kinds of textures like terrazzo, veiny black marble and speckled graphite. 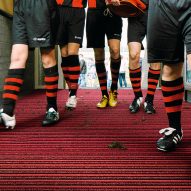 A selection of more than 50 different wood imitates – from charcoal to white autumn oak – can be used separately or combined to create a more realistic look.

The new colour ways also come in updated, smaller tiles, which can be arranged into intricate chevron or herringbone patterns.

Meanwhile circular tiles lend themselves to playful colour contrasts and can be used to dot a space and separate it into distinct areas.

Unlike cold, hard surfaces such as stone or concrete, the Allura collection is comfortable to touch.

It also includes the Allura Decibel range, which has been especially designed for sound absorption and can make a room up to 19 decibels quieter.

The tiles are produced using 100 per cent renewable electricity, while the backing is made from up to 60 per cent recycled waste.

When it comes to installing, Allura offers options which can either be adhered to the floor, loose laid using tackifier or fitted adhesive free, which allows the individual elements to be reused or replaced.

Previously, Forbo has released an entrance flooring system made from recycled fishing nets and plastic bottles, as well as carpet patterns that mimic natural cloud formations.