Danish firm BIG looked to its own architecture when designing the modular Voxel sofa system for Common Seating, making seats out of gridded pixel-like blocks.

BIG referenced various elements from its architecture projects when developing the seating, including the Lego House in Denmark, the 79 & Park apartment block in Stockholm and the 2016 Serpentine Gallery Pavilion.

The designers also took inspiration from unconventional sources, such as the pixellated style of the Minecraft and Q*bert video games, as well as the work of Modernist architect Mies van der Rohe.

BIG's founder Bjarke Ingels has previously spoken about his appreciation of Minecraft.

Designed to be moved, repaired, flipped, added to or removed, the Voxel sofa system was created to be adaptable.

The sofa system is made up of four main parts – the armrests, backrests, seats and legs – that can be interchanged and assembled in multiple ways.

As Jakob Lange, partner at the Bjarke Ingels Group (BIG), explained, the sofa's design was based on the concept of a building block or three-dimensional pixel, otherwise known as a voxel.

"The grid-like system creates a family of units that can be configured into multiple seating scenarios, from single unit couch to a large configurations," said Lange.

The sofa's modular design also lends itself to reduced waste. Owners can exchange or repair separate parts if needed, instead of throwing the entire piece out. 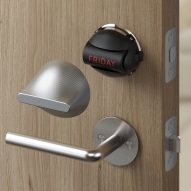 BIG's Friday Smart Lock is its smallest ever product

Developed for Danish furniture brand Common Seating, the Voxel sofa is made on demand and shipped directly from the workshop to ensure it only produces what is necessary.

"Voxel is a deep and comfortable sofa, with a quite structured appearance yet flexible characteristics," said Lange.

"If it were a person, [it] would be able to move, flex and adapt to different configurations, making it agile in any environment – at home or at work – and responsive to any individual."

"We like the idea that a person can really grow and live with this sofa, and make it an integral part of their living ecosystem," he added.

BIG recently made its foray into homeware design with its Friday Smart Lock, which is controlled via smartphone and can automatically unlock a door when it senses the resident approaching.

Designed to fit on the inside of almost any door, the smart lock can also lock the door as the resident leaves, or allow then to remotely control who has access to the property.