BIG founder Bjarke Ingels has unveiled his Serpentine Gallery Pavilion – a wall of translucent blocks that has been "unzipped" to create a curving, cavernous interior (+ slideshow).

Described by the Danish architect as "both transparent and opaque, both solid box and blob", this year's Serpentine Gallery Pavilion is designed as a simple wall that has been distorted into a more freeform shape.

Viewed side-on, the pavilion is rectangular. But when seen from the front or at an angle, its curving silhouette is revealed. It also changes from opaque to see-through, depending on the viewing angle.

"We liked this idea that, quite often, interesting things happen when you change seemingly incompatible elements and you combine them into a new hybrid – we call it BIGamy!" said Ingels, who founded BIG in 2005, and has completed projects including an underground maritime museum and an apartment block with a figure-of-eight plan.

"I think we tried to make a structure, that in an effortless way, combines a lot of differences," he continued. "So it's a wall that becomes a hall inside, it's a gate to the Serpentine Gallery, but it also creates a space for events."

"In one direction its all orthogonal and all transparent, but when you look through the other side it's all opaque and translucent and has this curvilinear face."

The structure is located outside the Serpentine Gallery in London's Kensington Gardens. It is made up of translucent fibreglass frames, stacked on top of each other in a typical brickwork pattern.

The hollow blocks are gradually shifted forwards and backwards to create two layers of undulating surfaces, which divide to create curved entrances at both ends of the pavilion, as well as the cavernous centre. 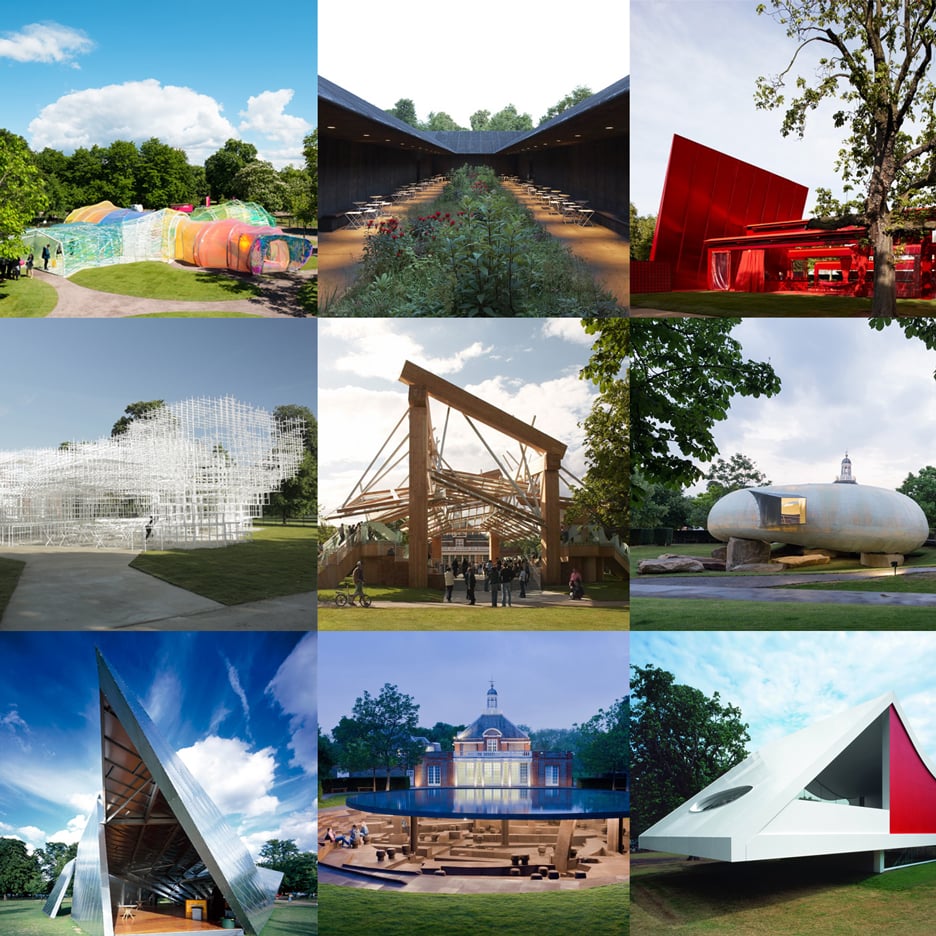 Every Serpentine Gallery Pavilion features on Dezeen's updated Pinterest board

According to Ingels, the idea originated from a translucent product he has been working on with material manufacturer Fibreline.

"We were actually working on a shelving system with these extruded fibreglass elements," he explained. "Essentially the pavilion is a hybrid between a building and a piece of furniture, so the wall is a giant shelf that you pull apart to create this interior space."

Ingels also describes the building as a tribute to his hero, Danish architect Jørn Utzon, who designed the Sydney Opera House.

"Utzon had this idea that you could create any imaginable form with carefully designed, mass-produced elements, almost like creating difference out of repetition, and it's essentially that spirit we've tried to bring here," he added.

Visitors will be invited to climb up the exterior, but only as far as as a slender metal wire that acts as a barrier.

Inside, wooden flooring forms a pathway through the building, and also forms seating elements with the same dimensions as the fibreglass blocks.

This pavilion contains a cafe and will also host evening events as part of the gallery's annual Park Nights programme, which includes performances of music, film, dance and literature.

BIG's structure marks the 16th edition of the annual Serpentine Gallery programme, which offers architects the chance to create their first built structure in the UK.

BIG is known for forward-thinking concepts and exciting ideas, but has only a handful of completed projects so far. Its most high-profile projects include Google's new California headquarters and a tetrahedron-shaped apartment tower in New York.

Dezeen recently looked back at each of the Serpentine Gallery's pavilions from 2000 to 2015 in a series of interviews with gallery director Julia Peyton-Jones.

Peyton-Jones – who leaves the gallery this year – described the 2016 edition as as "a supremely elegant structure that is both curvaceous wall and soaring spire".

For job opportunities at BIG, visit their company profile on Dezeen Jobs.