Eindhoven graduate Diego Faivre has coated electrical plugs in brightly coloured, patterned clay, in a bid to inject some fun into these "boring and forgotten" objects.

Where normally extension leads are hidden from view, Faivre hopes to present them as design objects in their own right, as canvases for his Memphis-tinged colour palette.

"I needed an extension cord for my degree show, and I genuinely just found it really ugly," he told Dezeen.

"So I started coating it in this air-drying clay almost without really thinking about it. I only realised later how much it resonated with people because they are genuinely the most unloved objects in our house. So it became a game to try and give them more excitement, to draw attention to them."

To comply with electrical standards and ensure the safety of users, Faivre either sources pre-made extension leads from the hardware store, or works on people's existing products.

He uses a special type of clay that remains pliable once dry, and applies it starting from the cord before moving on to hard shell, avoiding contact with any of the electrical components.

"It's only towards the end of the process that I start having fun with the patterns and the colour contrast, adding them peanut by peanut," explained the designer.

"The coating can also act as a protective layer and allows me to hide little imperfections. In a way I work like a physiotherapist, massaging objects to give them a second life."

In case of electrical overload or overheating he claims that, because the clay consists mainly of organic matter, it doesn't burn. Instead, it simply carbonises and turns slightly darker. 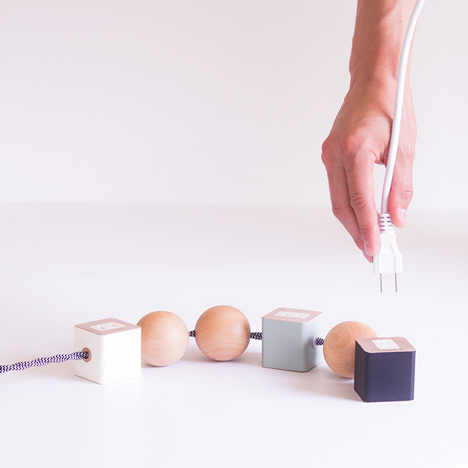 The plugs are costed up according to Faivre's Minute Manufacturing system, whereby every minute of production time costs £1. That means a product's final price is a direct reflection of the amount of time it took to make it.

In this way, he hopes to draw attention to the mismatch between the human labour involved in making a product and its final price within a system of mass production.

"When I was younger, I worked in a metal factory in France for nine months," he said.

"I was paid €0.15 (£0.13) a minute producing items that didn't reflect the human effort behind them or the human touch. I wish the people I worked with could've put something of themselves into what they were making. That's why the idea of Minute Manufacture revolves around bringing personality into boring and forgotten objects."

The project has also seen Faivre cover a range of other unloved objects, from found furniture to doorstops, with his signature colourful clay.

Elsewhere, designers have attempted to make plugs more appealing by turning them into a playful chain of wooden spheres and cubes or hiding their messy cables underneath a minimalist red lid.

Photography is by Pierre Castignola.