Located in Warsaw, the 150-square-metre studio is described by its architects as "a generous light-drenched space for undistracted experimentation".

It is a five-metre-high concrete box, with large, bespoke window walls on both the north and the south sides.

Obscured, reinforced glass features on the southern elevation, facing the street. This prevents passersby from seeing what's inside and prevents distractions to Sosnowska while she works. It also helps to subtly diffuse the bright midday sun.

Glazing on the north side of the building is low-iron, making it extra transparent. It offers clear views of the garden, which serves as an ever-changing backdrop to the sculptures on display inside the studio.

"We presented three options during our first discussion and a solid cube was one of them," explained Pawel Krzeminski, who leads Architecture Club with partner Karolina Slawecka.

Krzeminski said that this concept, of a basic volume defined by a few walls and a roof slab, was the one that felt right. They even simplified it further as the project developed.

"By introducing two large open facades, we were left basically with two walls and a roof slab," he told Dezeen.

"The project has nothing to do with trendy extrusions," he added. "It is about bringing architecture to the basic concepts, to a minimal design alphabet of walls and slabs. The rest is the space between."

The concrete walls and ceiling were cast against wooden boards, creating an organic texture both inside and out. This contrasts with the smooth finish of the polished concrete-aggregate floor. 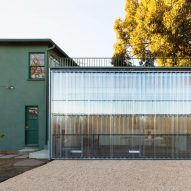 Three steel I-beams support the roof and incorporate lighting fixtures. But they are designed to also carry additional weight, so that Sosnowska can use them as a crane to hang her work from.

A few large wooden elements were also designed for the space. A free-standing oak partition contains a kitchen, a toilet and storage, while a six-metre long table runs alongside the north window.

Other details include a south-facing window seat with a heating and cooling system concealed within it.

"Introducing south light into an artist's studio was experimental, but conceptually it was what we wanted," said Krzeminski.

"In the end, the mixture of north and south light turned out to be extremely interesting for the space."

The project also included the construction of a timber storage shed, which also faces the garden.