Hand-moulded ceramic modules are balanced on top of each other to form structures close to two metres high, in this homeware collection by Russian architect Anastasia Tikhomirova.

The six-part Sirin Alkonost series was created for Moscow's Fabula gallery and presented at the Collectible design fair in Brussels last week.

The collection comprises of two tables and standing shelves, as well as a light and candle holder. These, in turn, are made up of up to 85 hollow ceramic cylinders, that are layered onto a skeleton of metal rods.

"My main goal was to challenge the material," Tikhomirova told Dezeen.

"Traditionally ceramics is used to create decorative, sculptural forms or flat surfaces like tiles. For me, as an architect, the fun came from trying to create some sort of building material, a structural element from it, to juxtapose those qualities of stability and fragility."

The clay modules are hand built and glazed in Moscow, and come in three different variations. Tall, thin cylinders are used to create the three-legged shelving units and the singular poles that make up the two lighting features.

Pearlescent spheres form precariously balanced feet, while wider, hockey puck-shaped modules are used to create the base of the tables.

"The assembly process is similar to a pearl necklace, you just put the beads on the string," said Tikhomirova.

"Or in our case, a metal rod. Although there's an order I prefer to use for stacking the elements, the owner can re-arrange them in their own way." 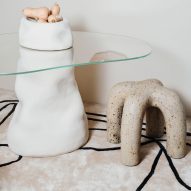 Each of the pieces is presented in two different colour schemes, which give the collection its name. Sirin features a palette of dark, moody green, grey and blue, while Alkonost brings in warm, faded shades of ocre and rust.

"The names come from Russian folklore and fairytale birds," the designer explained. "One is very joyful and light and one is more melancholic and wise."

The collection was presented as part of the third annual Collectible contemporary design fair, which took place in Brussels from 3-5 March.

This year, a variety of galleries took the opportunity to showcase irreverent lighting designs, and Dezeen's Anna Winston has rounded up her favourites.

Earlier this year, Studio David Thulstrup launched his take on ceramic furniture at Stockholm Design Week in the form of a pair of nesting tables.