Danish furniture brand Møbel has collaborated with Studio David Thulstrup to create a duo of odd-couple tables – one made entirely from ceramic and the other from contrasting, powder-coated steel.

The Pair collection, which launched at the Stockholm Furniture & Light Fair last week, is designed to be rearranged to suit different needs and settings.

With the smaller cylindrical table fitting neatly inside of its taller, three-legged counterpart, they can either be overlapped to increase the total surface area or kept altogether separate.

"We wanted to create a dynamic and playful pair of tables with a strong contrast between materials, colours and surfaces," studio founder David Thulstrup told Dezeen.

"The soft, glossy ceramic creates an interesting contrast with the cold matte metal," he added. "The void of one attracts the shape of the other, as if they were co-dependent objects meant to be together."

The duo is available in three different variations, toying with proportions from flat and compressed to lean and stilted.

Within the sets, there are five different colours ranging from muted shades of ochre or petrol blue to simple black and white. It keeps the focus on the ceramic's high-shine glaze, which Thulstrup said was difficult to perfect.

"It is extremely difficult to produce such large pieces of glazed ceramic," the designer explained.

"There is a good possibility of the glaze cracking or crawling when heating ceramic in the kiln at very high temperatures. It is never 100 per cent guaranteed that each piece will come out in perfect conditions, so it's all about experimenting."

With more than 700 exhibitors, Stockholm's annual Furniture & Light Fair is the largest design-led trade show in Scandinavia, drawing in designers from all over the region.

The event, which took place from 4 to 8 February this year, forms part of the wider Stockholm Design Week, which involved more than 200 events taking place in venues, showrooms and galleries.

Elsewhere, Thulstrup works across disciplines from interiors to architecture under the umbrella of his self-titled Copenhagen studio, hacking IKEA kitchens for Reform and designing a pastel-coloured boutique for fashion house Mark Kenly Domino Tan. 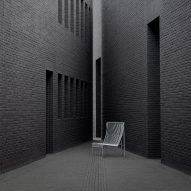 Massproductions' modular outdoor sofa is an homage to crowd-control barriers