A skinny chimney-style tower houses the bathroom and shower of a residential renovation in Amarante, Portugal, designed by architecture studio Fala Atelier.

The small, single bedroom house has been built in an old granite shack at the end of a garden patio.

Called Small House with a Monumental Shower, the new tower that gives the project its name abuts one corner.

"The tall tower is standing in paradoxical independence, refusing to be serious, making a courageous formal statement,"said Fala Atelier.

"[It is] a monumental object for a non-monumental program."

The large granite walls of the original building have been maintained, topped by a new thin metal roof.

New window frames and. the underside of the roof are finished in a contrasting teal colour.

Inside, the two floors of the home create two distinct spaces – a kitchen, living and dining area on the ground floor and with a bedroom above.

"The living area occupies the ground floor, relating to the surrounding gardens; the bedroom fits under the sloped roof, facing the views," said the studio.

At ground floor level, the tower houses a small toilet, and the shower and a second toilet are located on the first floor.

A new section of curved wall has been introduced to conceal plumbing and storage areas, also finished in teal.

In the bedroom, the pitch of the roof is highlighted by a wooden beam that runs along its apex.

A circular skylight at the top of the tower dramatically illuminates the shower, which is lined at its base by pale green tiles. 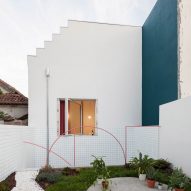 Fala Atelier adds colour to a 19th-century house in Porto

"The inside spaces are defined with a simple palette of materials – white walls, striped wooden floors, fractions of white marble and mint-green carpentries," said Fala Atelier.

A colourful, geometric design characteristic of the practice has been used on the exterior of the tower, echoing the colours of a pylon behind the home.

"From the outside, the ambiguous pattern of white and pink triangles makes and obvious contrast between the two actors," added the studio.

Recent projects include the redesign of an apartment in Porto with a mint floor, and the renovation of a 19th century house in Porto that added a series of graphic, colourful facades.