Architecture studio Red Deer and designer Jan Hendzel Studio have developed a series of valet stands for a renovated hotel in Hertfordshire, England, featuring hand-crafted details that make each one unique.

Designer Jan Hendzel oversaw the development and production of 120 bedroom valets for use at the Birch hotel in Cheshunt, which was renovated by Red Deer.

The sculptural objects can be used for hanging a jacket or dress, as well as providing a useful place to drop loose change, a mobile phone, a watch or jewellery.

The studio was asked to create valets for the guest rooms of a Georgian mansion house set on a 55-acre estate, which Red Deer turned into a contemporary retreat that includes a co-working space, two restaurants, a ceramics workshop and a bakery.

Red Deer's vision for hotel the was to "challenge wastefulness and uniformity" and the furniture within it is designed to encapsulate these values.

The architects had identified ceramicist Emma Louise Payne and designer Charlotte Kidger as suitable collaborators for the project. Hendzel added metalsmith Lucie Naujalis to the team and oversaw the composition of the various elements.

"We worked with Red Deer on the initial design phase to create an object that would harmoniously unify all of the different pieces," Hendzel told Dezeen, "then everyone went off and did their own thing."

"The brief to the artists was to produce as they normally would," he added, "which is how we ended up with such a range of interesting and different pieces."

The stands are anchored by colourful orb- or pill-shaped bases created by Kidger using waste plastic mixed with specially dyed resin. The material is poured into a mould in layers to create a multicoloured, stratified effect.

Ceramicist Payne produced a range of vessels for displaying flowers and Naujalis made hand-beaten patinated copper bowls for holding odds and ends.

Hendzel's studio was responsible for crafting the wooden stands, which are made from laminated pieces of sycamore and ash. All of the wood used was grown in Britain and sourced from continuous cover forests in line with the project's sustainable aspirations. 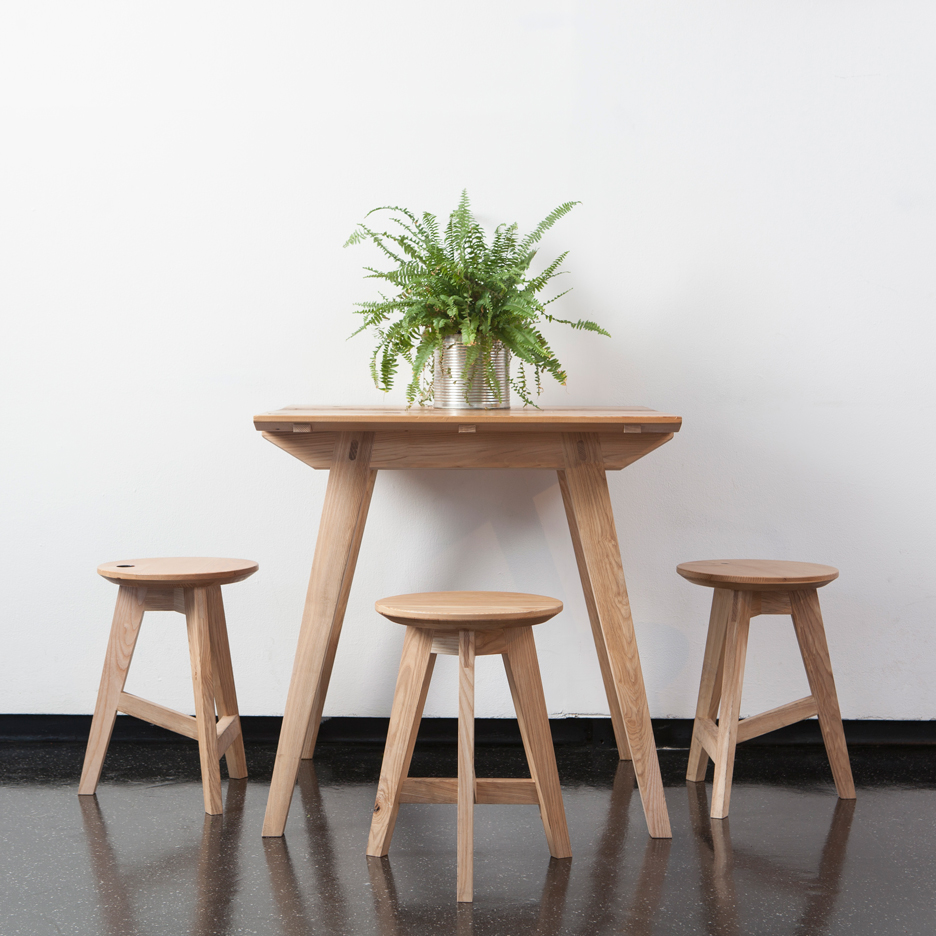 The studio also specified circular trays made from agglomerated cork that is heated and pressed into shape, giving it a distinctive dark hue.

In addition to the 18th-century mansion, the hotel also has a 1970s addition. The two styles of valet feature in different types of room, depending on how much space is available.

According to Hendzel, the joinery elements are the only parts of the valets that are standardised. Everything else is produced by hand, using methods that introduce natural variation.

"The project is about the provenance of materials and trying to be as honest with them as possible," he explained. "It's all hand crafted and the hand of the maker is evident in all of the pieces."

The studio also worked on other furniture and fittings throughout the hotel, including cork headboards in the bedrooms. It is currently developing exterior signage poles incorporating Emma Louise Payne's ceramics.

Hendzel established his studio in the Woolwich area of south east London in 2015. Its previous projects include creating a range of bespoke wooden furniture for a coffee bar at Camberwell College of Arts.