The Countryside, The Future exhibition at the Guggenheim says more about the shortcomings of its curator Rem Koolhaas than it does about the countryside, argues architecture critic Inga Saffron.

The Guggenheim museum's latest indulgence of the architect and self-proclaimed visionary Rem Koolhaas opens with two large photos taken a century apart and presented as a then-and-now juxtaposition. The first image, shot in 1909, shows three, fresh-faced Russian peasant women, simply but beautifully dressed in their Sunday-best. Two of the women wear kerchiefs tied modestly under their chins. Their expressions are serious, almost penitent, as they hold out plates of food in the traditional Slavic gesture of hospitality.

The second image, whose magenta tone echoes the colours of the women's clothing, suggests a world that has fallen far from that rural idyll. It depicts a vast indoor farm, where workers tend large flats of salad greens, factory style. They, too, wear kerchiefs, in the form of modern hairnets, as they hunker over planting beds. "What happened between these two pictures?" the accompanying text asks. For those who might have missed the heavy-handed visual message, Koolhaas explains that the 20th-century photo reveals a "stable environment where everyone – man, woman, child – knows their place," while "100 years later, country life has become inorganic".

Koolhaas clearly thinks he is being provocative by calling the show "Countryside, the Future"

The amount of naivete, privilege and all-around crank thinking embedded in this simplistic opening salvo tells you pretty much all you need to know about what follows. Koolhaas clearly thinks he is being provocative by calling the show, "Countryside, the Future," because the subject is a departure from his long interest in modern cities, beginning in 1978 with his book, Delirious New York.

"Countryside's" text-heavy exhibits, which occupy every inch of Frank Lloyd Wright's famous ramp, are meant to summarise case studies from five years of research carried out under Koolhaas' supervision by his employees at AMO, a division of the Office of Metropolitan Architecture, and students from Harvard's Graduate School of Design.

Yet, for all the fancy graphs and statistical information punctuating the presentations, the exhibit suffers from the same nostalgic worldview that Koolhaas betrays in his celebration of the three women. One can assume they didn't look quite as fresh-faced when they were out toiling in Russia's pre-Revolutionary fields, although they probably did know "their place," which was low on the empire's social hierarchy. Today's food producers may be less charming to look at, and there is ample reason to be concerned about factory farming methods, pesticides and genetically modified crops. But we're not going to feed a hungry world with the ox-ploughs and wooden tools used by Russian peasants.

From the show's title, you might assume that "Countryside" is an exploration of climate change and habitat destruction. You would be wrong. Although "Countryside" opened in February, while Australia was ablaze with brush fires, and Wuhan's 11 million residents were entering their second month of lockdown for the Covid-19 epidemic, there are only glancing references to the threat bearing down on our planet. Not only does the show skip lightly over the subject of climate change, it completely lacks anything that might be described as a central, organising theme.

To justify Countryside's ramblings, Koolhaas and Guggenheim museum curator, Troy Conrad Therrien, assert that it is a "pointillist" assemblage of information about the state of rural life. "Pointillist" is a clever word choice, since it connects the exhibit back to the Solomon R Guggenheim Museum's original collection of Impressionist paintings, which were often intended as critiques of modernity. But that fancy art term is really just cover for the show's incoherent assortment of cherry-picked facts and rural case studies. 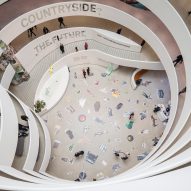 Countryside, The Future exhibition has "nothing to do with architecture" says Rem Koolhaas

One minute Koolhaas is knocking European officials for not appreciating the role that migrants could play in reviving the continent's depopulated small towns. Next, he is describing how Siberia's melting permafrost is threatening the livelihood of the region's Yakutsk reindeer herders. As an adaptation strategy, "Countryside" suggests that the Yakutsk villagers should expand their local film industry. That way, they could attract tourists and create jobs. Perhaps Koolhaas doesn't understand that effects of the melting permafrost will reverberate far beyond Siberia, unleashing huge amounts of carbon and hastening the earth's warming.

You get a sense of the craziness to come even before you start your journey up the Guggenheim's ramp. In one of the introductory text panels, Koolhaas explains that he came up with the idea for the exhibition while vacationing in a Swiss village near St Moritz and noticed – stop the presses! – that old farmhouses were being turned into tourist villas. "The countryside is largely off our radar," Koolhaas asserts in the show's catalogue. Uh, really? Perhaps he has never read Bill McKibben or heard about this little problem called sprawl.

Koolhaas likes to pretend that his research is value-neutral. He insists he eschews moral judgments and is merely presenting facts as a journalist – which he once was – would. But I often had the feeling that "Countryside" was pro-sprawl. Koolhaas repeatedly asserts that humans occupy just two per cent of the earth's surface, leaving the rest untouched – as if this were a problem.

But the breakdown is disingenuous. Koolhaas doesn't specify that 71 per cent of the earth's surface is water, but let's assume he is only talking about solid land. There is a good reason we cram ourselves into such a small area: much of the earth's landmass is uninhabitable desert and glaciers. Of the part that is habitable, half the land is devoted to farming. Is Koolhaas advocating that we intensify the settlement of those rural places?

In "Countryside, the Future," the hubris is all his

His past musings suggest the answer is, yes. Nearly a decade ago, Koolhaas organised a proto-version of "Countryside" at the New Museum. In that show, called "Cronocaos", Koolhaas complained bitterly about the army of preservationists and conservationists who are trying to prevent historic buildings from being torn down and virgin land from being developed. Of course, he doesn't come straight out and advocate for unfettered development in either show. That's not his style. Density is a virtue that Koolhaas once championed. But now seems to be looking for ways to undermine limits on where people build.

We might not know the precise origin of the Covid-19 virus, but we do know that the disruption of once-pristine habitats is increasingly causing viral genomes to jump from animals to people. Development, and the pollution that goes with it, is rapidly wiping out animal habitats, with grave consequences for ecological diversity. The worst part of "Countryside" is that it seeks to diminish cities and density as a desirable tool in the fight against climate change. When Koolhaas first proposed the show to the Guggenheim, he told Therrien, the curator, that his intent was, "to wean the west off its hubris." But in "Countryside, the Future," the hubris is all his.

Countryside, The Future opened at Solomon R Guggenheim on 21 February. The museum is now closed in response to the spread of coronavirus in New York City.

Architecture critic Inga Saffron has been writing about the design of buildings and cities for the Philadelphia Inquirer since 1999. Her work has been recognized with numerous awards, including the 2014 Pulitzer Prize for Criticism, the 2018 Vincent Scully Prize from the National Building Museum and a 2012 Loeb Fellowship from Harvard University's Graduate School of Design. In June 2020, Rutgers University Press will publish a collection of her Inquirer columns from the last 20 years, Becoming Philadelphia: How an old American city made itself new again.
Read more: