Japanese architect Tadao Ando is restoring an 18th-century stock exchange building in Paris and turning it into a contemporary art gallery.

Exhibition spaces are being built in a circular concrete structure that sits under the historic painted dome of the Bourse de Commerce.

They previously worked together in Venice, where the architect restored the Palazzo Grassi for Pinault.

Built as a corn exchange in 1767 on the site of a demolished mansion, the Bourse de Commerce was turned into a stock market in the mid 1800s.

Murals depicting trade between the five continents of the world dating from the 17th century decorate the underside of the dome.

"The circular section, faithful to its urban symmetry, includes a rotunda in its centre," said the Japanese architect.

"It is within this rotunda that there has been inserted a concrete cylinder with a diameter of thirty metres and a height of nine metres."

Along with seven exhibition galleries, the concrete shell will contain a reception space and a meditation room. 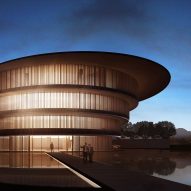 Tadao Ando reveals design for He Art Museum in China

Underneath, a basement level will hold a 284-seat auditorium in a central cylinder, with a black box-style studio for displaying video and sound installation around the perimeter.

"So far, the concrete for the walls of the cylinder has been set and the project is being completed," said Ando.

"The structure of the former edifice has not only been conserved, but it remains alive thanks to the creation inside of a new architecture, which extends to the basement," he added.

"It was a delicate project, but the construction team has done a remarkable job."

The Bourse de Commerce – Pinault Collection is due to open to the public in September 2020.

Tadao Ando has also used circular floor plans for the layout of the He Art Museum in Shunde, China, which is due to open later this year.

Photography is by M Tetard unless otherwise stated.