Ukrainian design brand Faina looked to ancient depictions of the female form when creating this "cloud-like" armchair, which takes cues from archaeological finds.

The Domna armchair has a bulbous form made up of two cushioned elements joined together.

Victoria Yakusha, founder of Faina, based the chair's shape on an anthropomorphic ceramic artefact that was found by archaeologists on Cetatuia Hill in Romania in 1942.

Made by the Cucuteni-Trypillia culture around approximately 5,400 to 2,700 BC, the sculpture depicted the bodily form of a goddess.

It was believed that four of these feminine forms facing inwards in an interlinked circle represented a hora – a ritualistic dance.

According to the designer, these figures of the female goddess' body served as talismans, to bring good luck on families and particularly farming culture. 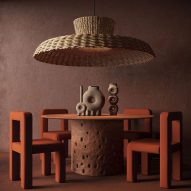 Yakusha wanted to achieve a "mild feminine form" with the Domna armchair, which she describes as having a warmth and "cloud-like softness".

On this same thread, she named the chair after the Ukrainian word Domna, which translates as stove, but is also a rare female name meaning priestess.

As Yakusha explained, her work is intended as a celebration of modern Ukrainian design, and is typically rooted in the country's cultural heritage.

She hopes each of her pieces will become like "family members" for their owners.

The armchair was debuted at this year's Collectible design fair in Brussels, which took place from 5-8 March.

Here it was presented alongside other bespoke design pieces by Faina, including the Ztista dining table and chair, the Solod sideboard with a ceramic facade and the Kumanec and Hata ceramic vases.

Yakusha looked to traditional, local materials for these furniture items, which are made from clay, wood, willow and flax, with some being covered with a special biopolymer coating. 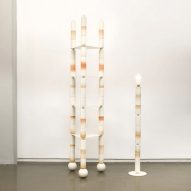 Elsewhere at the design fair was a homeware collection by Russian architect Anastasia Tikhomirova, which saw hand-moulded ceramic modules balanced on top of each other to form tables and shelves.