Decentralised local manufacturing could replace global supply chains as a result of the coronavirus pandemic, according to architects who collaborated on an open-source project to make face shields for hospital workers.

"Will this crisis reconfigure supply chains? I hope so," said Eric Höweler of Boston studio Höweler + Yoon, one of many US architecture firms that is using its 3D printers to make the face shields.

"We seem to have been caught by surprise, despite many experts warning of this exact scenario."

"It has also highlighted the fact that, in our global economy, we have outsourced and off-shored so much manufacturing of products," Höweler added. "We didn't realise how little we made domestically until we hit a crisis like this."

Höweler's firm is working alongside others to produce face shields from 3D-printed and laser-cut components, using an open-source design.

New York firm Bjarke Ingels Group has dedicated its model shop to make face-shield components and is tweaking the design to optimise production.

"This unprecedented event will most certainly also result in massive changes to current modes of thinking, making and distributing as well as showing the power of community empowered response when our city, national and institutions fail us," said BIG partner Kai-Uwe Bergmann, whose New York office is also manufacturing visors for hospital workers.

"Resiliency of all kinds will take on a new meaning." 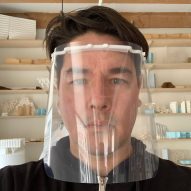 BIG founder Bjarke Ingels said the pandemic reveals the "shortcomings" of existing supply chains, with products, components and materials shipped around the world on a "just-in-time" basis.

Pandemic reveals "flexible making capacity that resides in so many places"

With international travel disrupted and many populations in lockdown, local networks of small-scale manufacturers could offer a viable alternative in some cases, Ingels said.

"One thing that we find intriguing is the idea of distributed just-in-time manufacturing capabilities," Ingels told Dezeen.

"Just like computers went from business machines to PCs to handheld devices, the internet went from institutional to businesses and internet cafes to cable and wireless," he said. "Perhaps manufacturing is in the process of moving from purpose-built factories to general capability and eventually to the maker hub on the block or the personal fabricator."

The face-shields project has revealed the untapped potential of architecture studios as part of an alternative manufacturing capability, he added.

"At least the massive urgency and shortcomings of the traditional provisions and supply chain during the Covid outbreak has revealed the flexible making capacity that resides in so many places you don't normally associate with manufacturing, like architecture and design studios," Ingels said.

"As with distributed computing, perhaps distributed manufacturing has potentials we haven't even thought of yet: the cloud of the material world that allows instant and omnipresent translation from data to matter."

"The just-in-time economics of our supply chain logistics has created a gap in our current urgent demand for PPEs that has caught the industry off guard," said Yoon, whose department coordinated the visor-making project.

"How can we as designers, makers and fabricators fill the gap by crowd-sourcing components through distributed networks of idle rapid prototyping resources, 3D printers in architecture schools and offices, and even desktop 3D printers?" added Yoon, who is also partner at architect Höweler + Yoon.

"While our 'rapid' prototyping machines are not meant for industrial-scale manufacturing, and by those standards are not 'rapid', as industry ramps up, our distributed maker capabilities can fill this essential gap to help those on the front lines of the Covid-19 health care crisis."

"Hopefully we learn from this crisis to think differently"

"Fortunately the maker movement has created a decentralised rapid prototyping network for small quantity production of components," said Eric Höweler. "Cornell's call to produce face shields mobilised hundreds of 3D printers that were sitting idle in offices and on desktops around the world. Social networks were able to rally resources and volunteers stepped up. It was remarkable to see a flood of people wanting to help."

"Will this bring large scale production manufacturing back to the US? Probably not," he added. "What it has showcased is a weakness in our current model, and hopefully we learn from this crisis to think differently. Someone said 'you can't let a good crisis go to waste'. We need to learn from this."