The development will contain a conference centre, bus terminal and theatre in organic-shaped buildings around curved landscaped outdoor spaces.

The buildings' irregular shapes will be built surrounding a number of outdoor public spaces. At strategic points, the terraces will dip to connect different floors to create small, outdoor atriums.

All of the buildings will be connected at the second floor, which will function as a bridging element.

In the largest building, which will be home to a conference centre as well as a bus terminal, a large open-air atrium will be carved out in the centre.

A small gallery, library and outdoor theatre will also be housed in Shenzhen Terraces, which will be made using recycled concrete as the aggregate. 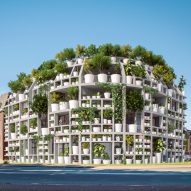 The development in Universiade New Town, Longgang District will be the centrepiece of the university neighbourhood.

The plan is for the development to become a sustainable hub for the area, with extensive portions of the rooftops covered in photovoltaic panels and green lawns, and roof terraces with large overhangs providing shade.

Plants and water basins function as a climate buffer to the interiors, and will also be a prominent part of the design on ground level to provide a habitat for urban wildlife and reduce the temperature of the surroundings.

"Shenzhen has developed so quickly since its origins in the 1970s," said MVRDV founding partner Winy Maas.

"In cities like this, it is essential to carefully consider how public spaces and natural landscape can be integrated into the densifying cityscape."

"The urban living room of the Shimao ShenKong International Centre will be a wonderful example of this, and could become a model for the creation of key public spaces in New Town developments throughout Shenzhen," continued Maas.

"It aims to make an area that you want be outside, hang out and meet, even when it is hot – a literally cool space for the university district, where all communication space can be outside. It will truly be a public building."

In 2019, MVDRV unveiled plans for another green development, the Green Villa, which has a living facade made of plant pots.

London architecture practice Sam Jacobs recently built a neolithic shelter that is "both familiar and alien" in Shenzhen.

Images are by Atchain and visualisations by Antonio Luca Coco and Kirill Emelianov.