Architecture practice MVRDV has unveiled designs for a residential development in Sint-Michielsgestel, the Netherlands, with green walls formed of shelves of plants.

Together with their co-architect Van Boven Architecten, the Dutch practice has developed Green Villa for property developer Stein to sit in a corner site on the southern edge of the town.

The three-storey housing block will follow the mansard roof shape of the neighbouring building, but its entire frontage will be covered in giant rows of shelves covered in greenery.

Potted plants, bushes and trees will sit upon shelves of varying sizes and depths. Species planned for the living facade include forsythia bushes and jasmine plants, as well as pine and birch trees. Further pots are to be installed on the roof.

"This design is a continuation of our research into facade-less buildings and radical greening," said Winy Maas, founding partner of MVRDV.

"The idea from the 1990s of city parks as an oasis in the city is too limited. We need a radical 'green dip'," he added, referencing an upcoming book of the same title from think-tank The Why Factory.

"We should also cover roofs and high-rise facades with greenery," continued Maas, who leads The Why Factory.

"Plants and trees can help us to offset CO2 emissions, cool our cities, and promote biodiversity."

Green Villa's grid of plants will double as a "three-dimensional arboretum" and "tree library", with each plant labelled with a nameplate and accompanying information.

Stored rainwater will be used to water the plants via a sensor-controlled irrigation system built into their planters to keep them green all year round. 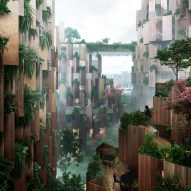 "The Green Villa is also a personal project, because I went to school in Sint-Michielsgestel," added Maas. "Just like I did before with the Glass Farm, in my native village of Schijndel, I am returning to the region of my youth."

Completed in 2013, Glass Farm is a shop and office complex made of glass but disguised to look like a tradition farmhouse.

MVRDV has also designed a skyscraper in Shenzhen, China, with rooftop gardens and outdoor parks at various levels.

Visualisations are by Antonio Luca Coco and Pavlos Ventouris.