Architects and critics have hit out at threats to close London's parks amid the coronavirus pandemic, with one describing it as "collective punishment".

Brockwell Park in south London was sealed off on Saturday while authorities threatened to shut other open spaces, following concerns about overcrowding and irresponsible behaviour.

"Ridiculous to shut parks," said HAT Projects co-director Hana Loftus on Twitter. "Police being pretty heavy-handed in others, threatening a complete ban. Seems a London thing but the mercury is hitting 20c and going to be warmer over the next week, what are people meant to do?"

"How do you expect people living in overcrowded flats with no outside space to cope?" she added. "Total lack of empathy or simple understanding that not everyone lives in a house with a garden."

Phineas Harper, former Architecture Foundation director and incoming director of Open City and Open House tweeted: "The cops should be put to work sewing gowns for nurses, not shouting at families in parks."

Harper suggested that many media images purporting to show overcrowded parks were misleading.

Many were shot with a long lens, which "has the effect of compressing perspective, making people who are far apart appear to be almost tripping over each other," he wrote. "Cynical and deceptive."

The Twitter backlash came after Lambeth Council closed the 50-hectare public park in south London after locals flocked there during the warm weather. Other authorities threatened to follow suit.

"Despite clear advice, over 3000 people spent today in Brockwell Park, many of them sunbathing or in large groups," wrote Lambeth Council. "This is unacceptable. Unfortunately, the actions of a minority now means that, following police advice, Brockwell Park will be closed tomorrow."

"Calling everyone who goes to the park #covidiots is wrong"

"Completely agree," replied Archiboo founder Amanda Baillieu. "We are much safer outside."

Parks are "helping to keep us sane," Baillieu added.

The UK government's coronavirus guidelines allow people to undertake one bout of outdoor exercise each day. They should remain at least two metres away from other people. Visiting parks has not been banned, but concern has been mounting over the numbers of people using open spaces.

UK health secretary Matt Hancock yesterday warned that outdoor exercise would be banned if people continue to flout the guidelines.

Parks in other countries in Europe have already been closed to restrict the spread of coronavirus. In Italy and Spain all public parks have been closed, while major cities including Paris have also closed all parks.

"Astounding levels of aggression and inhumanity out there"

Some observers pointed out that Londoners living in cramped accommodation without gardens or balconies had no option but to venture to public spaces, many of which were originally created for the benefit of the urban poor. 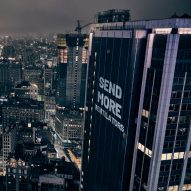 Architecture writer Tim Abrahams added: "Most of London's public parks were created to help the working classes live with overcrowding and disease."

"Remarkable how many people – who evidently have plenty of support, no dependents, and lots of outdoor space – are calling on the Government to force parents in flats to lockdown their children 24/7," said Jon Burke, a councillor in Hackney. "Astounding levels of aggression and inhumanity out there."

Concern over access to open space is rising in other cities too, especially as warmer weather approaches in the northern hemisphere.

"Lots of people here have been lobbying to close some streets to cars in dense neighborhoods to allow people to spread out, but that hasn't happened yet," tweeted San Francisco architect Mark Hogan. "People can't be expected to stay in tiny flats for months on end! Especially children!"

Coronavirus movement restrictions in the UK are more relaxed than in many other countries, where curfews and enforced bans on leaving home are in place.