Two white volumes are fronted with large openings that frame countryside views "like works of art on the wall" in this Menorca house designed by local architect Marina Senabre.

The home is intended to reflect both the architecture of the Mediterranean island and minimal contemporary design.

Both structures are rendered and painted white. One is long rectangular building with a flat gravel roof, while the other is a smaller gabled unit topped with recycled terracotta tiles.

"The house is presented as a conversation between two architectural pieces," Senabre said. "Two volumes that represent, on the one hand, the characteristic construction and building of the island of Menorca and, on the other, contemporary architecture."

"There is no place for ornament, the house values the concept, proportion and simplicity," she added.

Doors are formed from wood planks to match the frames around the square windows, which are arranged to capture scenes of the landscape.

"The Menorca countryside manages to enter the house through the large square openings, like works of art on the wall that completely link it to the territory," the architect added.

Living spaces, including the kitchen, dining and lounge are housed in the larger volume. Inside, white walls are paired with pale floors, wood accents and simple furnishings, including a rustic wood coffee table and white couch. 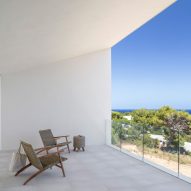 The kitchen walls are covered with a series of white cabinets coupled with stainless steel appliances. A large white island and pendant light fixtures stand out in the centre.

"The interior of the house has been designed to reflect the same duality, it is minimalist and also warm, thanks to continuous materials that cover horizontal and vertical surfaces always in contact with traditional elements, such as natural woodwork," Senabre said.

The smaller structure contains guest quarters, a space for playing sports and a small indoor pool. This shallow basin of water has a miniature fountain decorated with rocks and is situated in front of a large window directed at a view of the landscape.

A bigger pool also runs alongside the two buildings outside. Concrete and gravel paths connect the structures and also form a narrow patio space.

Marina Senabre is an architect and graphic designer who founded her eponymous studio in 2012 with offices in several Spanish cities including Menorca and Barcelona.

Other white houses in Menorca with generous views of the landscape include a concrete volume fronted with large openings that face the sea and a holiday home formed by a series of irregularly stacked boxes.

Photography is by Julio Feroz.