In the final part of VDF's collaboration with Zoomed In festival, we broadcasted a discussion with architectural photographers Dennis Gilbert and Jim Stephenson, who screened films from their personal archives.

Gilbert, guest curator of the day's Zoomed In programme and co-founder of image archive VIEW Pictures, presented a film he made to celebrate Walters and Cohen Architects' 25th anniversary this February.

Gilbert revisited 20 projects which he had previously been commissioned to photograph for the practice, and shot the whole film in just three months. The full film can be seen here.

The film, which was commissioned by The Architects' Journal, examines the building's position in the surrounding rural landscape, and shows it in a variety of atmospheric states of weather. You can watch the full film here.

Zoomed In is a new virtual design festival celebrating architecture and photography, founded by Luke O'Donovan. Running live from 21 April to 24 April, the festival brings together an international selection of architectural photographers and cross-disciplinary creatives in a series of online talks and discussions, short film screenings, image galleries and a charity print sale in aid of the Trussell Trust. 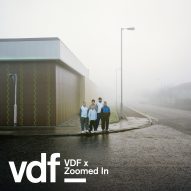 The programme will be curated by VIEW Pictures, Mass. Collective, Laura Mark and Francisco Ibañez with Luke O'Donovan.