Artists and designers including Vivienne Westwood, Christopher Kane and Wolfgang Tillmans have created protest-style posters about coronavirus for Dazed Media.

As part of its #AloneTogether campaign, Dazed Media asked creatives to design posters that respond to the changes brought about by the pandemic and call for a better future. Graffiti artist 3D, fashion designer Katharine Hamnett and director Margot Bowman have also contributed poster designs.

"There is a long history of political protest and creative resistance being expressed through poster design, illustration and graphic art," he added.

"Whether they are posters intended for the street or for the screen this inspiring collection gives voice to artists' social, political and personal reflections."

Westwood, who has previously called to ban land ownership and protested climate change at her catwalk shows, also designed a poster for the #AloneTogether campaign.

Executed in her signature punk style, the slogan "Buy less, chose it well, make it last" is splashed in acid-yellow block letters on a hot pink background.

Fashion designer Kane put the words "Be open to the joy you deserve" in a white sans serif font on a black background.

3D, also known as Massive Attack's Robert Del Naja, made a poster with no words, just a universal symbol for a hand with a plus sign on the palm.

Photographer Tillmans' poster features a collage of photos of printing presses with the words "to keep the free press free pay for it" scrawled across it. Tillmans recently created a special edition memorial cover for the Evening Standard magazine and an anti-Brexit poster.

Fashion designer Hamnett, who is well known for her political slogan T-shirts, made a simple black-and-white poster that says simply: "Save our future".

An illustration by Bowman depicts four nude figures, interlocking yet isolated, looking into their mobile phones. The ambiguous image could be one of online connection or loneliness in lockdown.

Artist and model Lotte Anderson took a self portrait with a devil's fork and a teddy for her poster, surrounding herself with abstract slogans calling for a rent strike and listing lockdown essentials such as weed, Juul Pods and chocolate.

Illustrator and designer Kris Andrew Small's poster says "Get out from the inside" in the artist's signature collage of dynamic type against technicolour backgrounds.

Artist and writer Wilson Oryema repeated the phrase "Ladies and gentleman, we are floating in space", the title of a 1997 psychedelic rock album, in white and black letters on a tomato-red backdrop

Fashion designer Charles Jeffery asks "How does it make you feel?" over a screaming, grinning face wearing dramatic makeup reflected in a broken mirror. 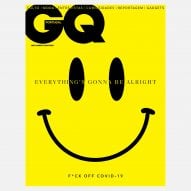 Climate activist group Extinction Rebellion produced a poster with a large letter A that is weeping over a dead butterfly. Illustrator Polly Nor drew a figure in bed hugging a tree next to a quote by Yrsa Daley-Ward.

Pictures of the Earth from space are a recurring theme. Photographer and director Jonas Linstroem put the world on a mockup of a newspaper front page, and sculptor William Farr created an Earth from flowers.

Political artist Peter Kennard and anarchist artist Jamie Reid reworked Kennard's piece Disarm Now! depicting nuclear weapons being broken in half to include the words "Afterwards the rumour is another world is possible".

Several of the artists who took part in the #AloneTogether campaign have also donated signed artworks to a charity auction being held to raise money for Barts Health NHS Trust.

Many major magazines have put coronavirus on the front cover to mark the crisis, and last month graphic designers created a series of illustrations to help share helpful advice during the pandemic.