Hamnett, who is known for her outspoken activism, has taken aim at the government's decision to uphold the result of last year's EU referendum by releasing T-shirts emblazoned with bold text that reads "CANCEL BREXIT".

The T-shirts, which are ethically produced in a wind-powered factory, are being sold to fund a campaign for the UK to remain within the European Union.

The garment has been seen on a number of prominent figures as a show of pro-EU solidarity, including Garage Magazine fashion director Phoebe Arnold, designer John Booth, and actor Rhys Ifans.

In a break from Hamnett's usual slogan T-shirt design template, quotes from key political figures are printed underneath the main slogan, which she attributes to a "brilliant new digital T-shirt printer" that allows on-demand production.

One version cites Antonio Tajani, president of the European Parliament, who stated in April after a meeting with Theresa May that "If British voters changed their minds they would be welcomed back with open arms. Everyone would be for it."

The Cancel Brexit T-shirts were also worn by protesters at the People’s March for Europe last weekend in London, which saw thousands descend upon Parliament Square prior to the vote on the EU Withdrawal Bill in the Commons.

"Fashion should always be doing more and it never does," said Hamnett, who was a speaker at the march.

She also told Dezeen that she believes her trade will suffer as a direct consequence of Brexit: "There is an enormous opportunity for the British fashion industry if Britain stays in Europe due to the free trade agreement that's being negotiated between Europe and Japan."

The designer, who graduated from Central Saint Martins before founding her label in 1979, quickly rose to prominence after releasing black and white T-shirts emblazoned with block-text slogans that referenced pressing current affairs of the time.

Her "CHOOSE LIFE" and "USE A CONDOM" designs became synonymous with 1980s pop culture after being worn by celebrities such as George Michael in a campaign to raise AIDS awareness.

During 2017's general election she campaigned to protect the national health service from potential future privatisation and endorsed Labour with her "CHOOSE NHS" and "VOTE TACTICALLLY" T-shirts.

Designers and artists have used their design and art works to make political statements during and following both the EU referendum and 2017 election in the UK. In the aftermath of the UK's decision to leave the European Union in June last year, illustrators were quick to post their reactions on Instagram and Twitter. Meanwhile British artist David Shrigley and London mayor Sadiq Khan launched a series of artist-designed posters for London's Tube, which declared that the city would not "cut itself off from the rest of the world". 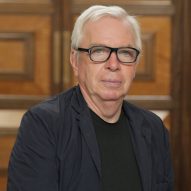