The Hanwha headquarters office tower in Seoul has been remodelled by Dutch architecture firm UNStudio, retrofitting its facade to hold solar panels.

UNStudio won the competition to retrofit the headquarters for the Hanwha Group – along with engineers Arup and landscape designer Loos van Vliet – in 2014.

The Hanwha Group wanted a more sustainable office to better reflect its position as the world's third largest producer of solar panels.

An existing facade of flat, dark glass has been replaced by clear glass in an aluminium frame.

Hanwha headquarter's facade is designed so the windows are angled away from direct sunlight, to stop heat gain and glare.

Parts of the facade that hold the solar panels are also angled to make the most of the sunlight while shading the windows below.

UNStudio remodelled the building while it was still occupied.

The studio worked on three stories at a time, both inside and out, to allow the rest of the building to operate normally. 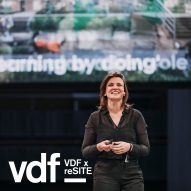 Landscaping around the plaza in front of the tower creates multiple pathways to the entrance, with planters that funnel people along and double as outdoor seating.

The lobby space was redesigned to feature higher ceilings and more natural light.

Wooden finishes and flashes of orange banding decorate the space, along with bands of lighting that direct visitors through the entrance space and to the lifts.

Meeting rooms have been redesigned with a combination of clear and translucent glass to balance natural light with privacy.

On the 28th floor the staff restaurant is decorated with wood panelling and planters filled with greenery to create a calming place for employees to spend their lunch breaks.

Founded in the Netherlands in 1988, UNStudio has a big focus on sustainability. The practice is currently designing a smart city in Helmond that will harness technology to help residents produce their own food and energy.