Tatari, associate director and senior architect at the Amsterdam architecture studio, spoke about her work on smart cities including the Brainport Smart District in Helmond, billed as "the smartest neighbourhood in the world".

She began her lecture, given at reSITE's REGENERATE event in September 2019, by saying that she wanted to present a more optimistic approach to how we design and think of the world today.

"We architects, designers and urban planners need to engage with innovative clients, city officials and experts to create real-life integration solutions for what is challenging our environment," she argued.

UNStudio, founded in 1988 by Ben van Berkel and Caroline Bos, has worked on a number of projects that have a social impact on the cities where they are located, Tatari said.

It began with the Erasmus bridge in Rotterdam, she said. The bascule bridge, designed by UNStudio and completed in 1996, linked the previously disconnected northern and southern parts of the city, facilitating the recent development of the city's former docks.

Another example is the 2015 transport terminal in the Dutch city of Arnhem. "The station that we designed there became a catalyst for the city because it gave a human approach to infrastructure," Tatari said. "We hope that with upcoming projects we create links and grow across cities."

Creating "the smartest neighbourhood in the world"

For UNStudio, technology can be a tool to create a more human environment. Tatari explains that the studio launched UNSense, its "arch tech company", to focus specifically on these issues.

UNSense is currently designing The Brainport Smart District in Helmond, a smart-living and -working district in Brandevoort, Netherlands, where residents produce their own resources and control the use of their data.

"The Brainport Smart District aims to become the smartest neighbourhood in the world," she said. UNSense envisions the district eventually becoming its own economy.

"Our residents are invited to participate in a communal way with the shared systems of energy and food production," Tatari explained. "For example, 30 per cent of our food can be locally produced, and the plan with this kind of broad productive landscape can be to actually do it within the district."

UNSense is currently working on the first hundred data-enabled homes in Brainport Smart District, which requires the studio to think of aspects that don't usually need to be taken into account when designing.

"The living environment in this kind of '100 homes project' consists of three layers," Tatari explained. "The physical layer, which is what we all know best – architectural public space infrastructure." 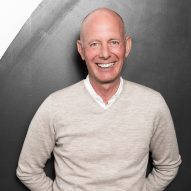 "The data layer, whose strongest backbone is the informed consent of every resident in the district, and the value layer, where the residents can exchange their partial data, or whatever they give consent to, with services."

UNStudio's ambition for the project is to create a district that is never finished, but actually adapts to technology and the wishes of the residents, she concludes.