Products database Architonic has acquired architecture news website ArchDaily in a deal thought to be worth around €10 million.

Architonic, based in Zurich, said the two brands will "join forces strategically to consolidate their market positions and cross-leverage their expertise, with an ambitious plan for growth and innovation."

The two sites will continue to operate as separate platforms, Architonic said.

"Founded by architects for architects, ArchDaily and Architonic share the same DNA, providing the perfect fit in terms of both mission and culture," said Architonic CEO Stephan Bachmann.

"Our coming together as one international organisation means we can bundle our joint expertise and experience, and leverage it to develop and grow further our two sister platforms individually."

Architonic, which maintains a list of around 400,000 furniture, lighting and other products, was founded in 2003 by architects Tobias Lutz and Nils Becker. Becker has since left the business.

The ArchDaily deal comes five years after Architonic was itself bought by Swiss media group NZZ, which bought a majority stake in Architonic in 2015 and acquired the remaining share of the Swiss brand in March this year.

ArchDaily, which publishes news about architecture and maintains a database of architectural products, was founded in 2008 by architects David Assael and David Basulto.

It is headquartered in Chile and has regional websites publishing in Spanish, Portuguese and Mandarin alongside the main www.archdaily.com website.

"Architecture industry is on the verge of a rapid digitalisation"

"As the urbanisation of the world continues to grow exponentially and the architecture industry is on the verge of a rapid digitalisation process, our profession is more important than ever," said ArchDaily co-founder David Basulto.

"Architonic and ArchDaily want to play their own active role in shaping these developments by providing inspiration, knowledge and the relevant tools through both their platforms." 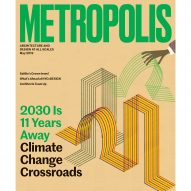 The online architecture and design media landscape is still dominated by independent platforms, many of which emerged from the blogging boom in the early years of the century.

While some have continued to thrive, others have closed or been acquired by larger media brands or e-commerce players. US interiors site Design*Sponge closed in August last year after 15 years. Around the same time, Design Milk was bought by e-commerce platform Ahalife.

US urbanism network Curbed was acquired by Vox Media in 2013, although several of its city-specific sites were later closed. Last month, Curbed was folded into New York Magazine.