Architecture studio Kohn Pedersen Fox has completed the 190-metre-tall Scalpel skyscraper alongside the Lloyd's building at 52 Lime Street in the City of London.

The Scalpel is the latest skyscraper to be built in the City of London cluster, which also includes RSH+P's Leadenhall Building, Foster + Partners' Stirling Prize-winning 30 St Mary Axe and the Foggo Associates-designed 70 St Mary Axe.

Kohn Pedersen Fox (KPF) created the 38-storey skyscraper's angular shape, which gave it the name the Scalpel, to allow it to be built along Leadenhall Street without interfering with any of London's protected views.

"At the outset of the project the city cluster was in its infancy," William Pedersen, co-founder of KPF, told Dezeen.

"Working with the planning authorities, KPF demonstrated the potential for a tall building on the site that would maintain the street edge, preserve protected views and enhance the public realm through the provision of new public space between 52 Lime Street, the Willis Building and the Lloyd's building."

The building's facade leans back from Leadenhall Street. This means it is hidden behind St Paul's Cathedral when viewed from Fleet Street.

"The kinetic views along Fleet Street played an important role [in the building's form]," said Pedersen. "To protect the view of St. Paul's Cathedral, the building needed either to be stepped or inclined behind the dome."

"The inclined facade and taut sculptural form offered a calm silhouette as well as providing a wider variety of floor plate types and greater efficiencies," he continued.

According to the architect the building was designed to add to the drama of the City of London's skyscraper cluster, and mirror the form of the Leadenhall Building.

"At KPF, our aspiration from the earliest days was to find a way for tall buildings to create a more 'social' interaction with the cities they inhabit – they need to be able to respond and gesture to their context," continued Pedersen.

"In the City of London what has been created, in effect, is a type of urban drama. 52 Lime Street responds by leaning back to respect the view corridor, creating a paired but mirrored gesture to the Leadenhall Building, which makes for an exceptional urban conversation, one which is theatrical in its nature." 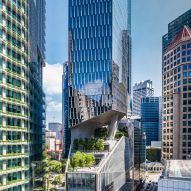 However, unlike the other towers that have maintained their official names, this skyscraper has adopted its nickname officially, something that Pedersen approves of.

The Scalpel is clad almost entirely in high-performance glass, with the building's lift and stair core placed on the south facade to shade the interior spaces. The building has been awarded a BREEAM sustainability rating of excellent.

"The high-performance glazed facade acts as a foil to the highly textural surfaces of the buildings around it," said Pedersen. "The facade treatment, with strong metal edges, reinforces the form and defines its appearance at different scales around London."

Internally the floor skyscraper's floors diminishes in size as the building rises to its peak. However, although the building has a non-standard form, KPK designed the tower so that each floor would be relatively easy to fit out.

"The facade is specifically designed to respond to this internal grid, mullions are rotated to align with the grid and notional partitions, resolving the complex geometry and making it easy to fit out."

KPF's Scalpel skyscraper is a global architecture studio founded by Pedersen alongside Eugene Kohn and Sheldon Fox in 1976, which is responsible for numerous skyscrapers in many of the world's major cities.

The studio recently completed the "highest outdoor sky deck" on a skyscraper in New York, Beijing's tallest skyscraper, and a tower with stepped and planted roof terraces in Singapore.