The 528-metre-tall CITIC Tower designed by American firm Kohn Pedersen Fox is the tallest skyscraper in Beijing, the fourth-highest in China and number eight worldwide.

Kohn Pedersen Fox (KPF) designed the 109-storey skyscraper, which is widely known as China Zun, to have a distinct profile on account of how visible it would be on the city's skyline.

"Imagining the city's tallest tower as a representation of its history and people, we approached the building as a public entity in our design," explained Robert Whitlock, design principal at KPF.

The skyscraper, which was based on a concept created by architecture studio Farrells, is located next to the CCTV headquarters by OMA in Beijing's central business district. It has been designed to be a visible anchor at the northern end of the district and a landmark for the whole area.

"KPF's goal for CITIC Tower was to create a centrepiece for the new CBD that would elicit harmony with the historic capital while proposing aspirational and contemporary architecture," said Li Lei, design director at KPF.

According to the firm, the skyscraper's shape is based on the form of a zun – a type of bronze or ceramic ceremonial vessel that were first made in the bronze age.

The tower is broader at the base and top than it is at the middle, giving it the appearance of having a tightened waist. The floors, which are square with rounded corners, are 78 metres wide at the tower's base and 69 metres wide on the top floor, while the smallest floor is only 54 metres wide.

"We abstracted the zun's elegant form and focused on its gradual transformation, applying this motif across immense scales: from the tower's overall massing, all the way down to its curtain wall, entry vestibule, and interior detailing.

"In all, we feel that CITIC Tower's graceful skyline profile, dynamic street-level presence, and transparent lobby and observation hall answer its architectural mission."

The tower contains the headquarters of the CITIC Group and CITIC Bank as well as office space for tenants.  It is accessed via lobbies on the ground floor, which have glass roofs that project out from the tower to mark the entrances. 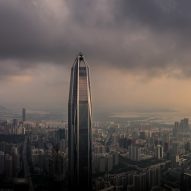 KPF's Shenzhen skyscraper is now fourth tallest in the world

"The curtain wall, a light and delicate layer, folds out at the base and signals the building's various entry points," added Whitlock.

"It appears to float above the ground plane, evoking the human scale and activity that occurs at its base and ultimately promoting public engagement with the architecture and the district on a whole. This synchrony of tower and landscape, coupled with its simple, sculptural form, define CITIC Tower."

KPF is an American firm established in 1974 by Eugene Kohn, William Pedersen and Sheldon Fox. The firm is responsible for designing numerous skyscrapers including four of the world's 10 tallest buildings.

Photography is by HG Esch.