Pockets of greenery are used to contrast the bright "canvas" of this white house that Mexican studio Jaime Juárez R Arquitecto has completed in Morelia.

The local practice designed a series of volumes to suit the unusual triangular shape of the plot. They include two one-storey blocks – one of which is cantilevered at the rear – that fork out in opposing directions. A third, smaller structure is stacked on top to rise two storeys.

All the walls are constructed from brick and concrete and then rendered white to create continuity across the property.

"We used brick and concrete for the walls, which were covered on white to create a canvas for reflections and shadows," studio founder Jaime Juárez Ruiz told Dezeen.

San Antonio House is located in Morelia, a historic city in the central Mexican state of Michoacán. It joins among a number of recent projects in the area that have made use of bright white architecture.

Examples include a food market that HW-Studio built between stone buildings and a residence that Roof Arquitectos designed around a "forest" of red oak trees.

In San Antonio House, a concrete platform with a pool is sandwiched between the two lower blocks before they extend out towards the rear. 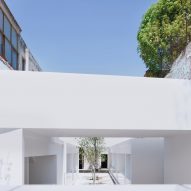 Large expanses of glazing wraps one housing the kitchen, an open-plan living and dining room, and a patio. White walls enclose a master bedroom suite and a smaller terrace in the second.

The two-storey volume meanwhile hosts the garage on the ground floor and two more bedrooms on the upper level, accessed by a staircase with a white handrail and wooden treads.

Lightwells are punctured throughout the 409-square-metre residence to mark spaces for greenery to grow. They include a small pocket beside the main staircase and another in the master suite.

"The main objective was to generate various sensations and visual frames to the users, through different elements such as trees, light shafts and huge windows," Ruiz added.

Greenery is used to offset a simple material palette that features through the interiors, including the white-rendered walls, black stone flooring and rich wooden details.

"Inside, we integrated wooden elements on the stairs, the bedrooms and the lobby," the architect continued. "The floors were made up of stone from the region, and burnished concrete."

Photography is by César Belio.