In this special instalment of our Screentime series VDF goes live to Milan, where Bar Basso owner Maurizio Stocchetto tells the story of the design world's favourite drinking spot and shows how to mix the bar's signature cocktail.

Stocchetto shows us how to make a negroni sbagliato, or "mistaken negroni", a mix that was invented by his father, Mirko Stocchetto, in 1972 when he erroneously added prosecco instead of gin while making the classic cocktail.

The drink has since become a classic in its own right.

Skip 17 minutes into the video if you're eager to see Maurizio making the cocktail.

Bar Basso became a favourite among the design scene in the 1980s when British designer James Irvine, who had moved to Milan, became a regular at the bar. 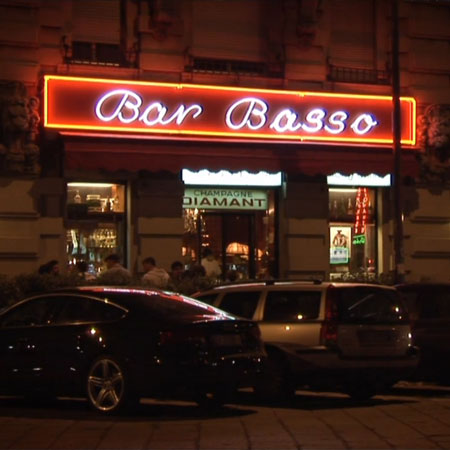 Stocchetto first told the story in a video interview with Dezeen in 2010, when we hosted a party at the bar.

Stocchetto described how Irvine would often invite his designer friends along to enjoy the bar's old-fashioned charm and its cocktails served in hand-blown Venetian glasses.

The invitation below is for the second of these parties, hosted by Irvine, Newson, Morrison plus Jerzsy Seymour, Thomas Sandell and Peter Hallén in 2001.

"I went to the party and it was great fun," said Swedish designer Emma Olbers, who shared the invitation with Dezeen.

Word spread and now thousands turn up each night during Milan design week, spilling over the pavement and the roundabout in front of the bar and establishing a tradition for late-night drinking and networking.

Bar Basso is located at Via Plinio 39 in the east of Milan.