Planning consent to start the Swiss firm's £500 million renovation plans ran out on March 31, as first reported by Build Design.

As no progress had been made on the project since it was put on hold indefinitely due to an "unfavourable investment climate" in 2018, this means the plans are now dashed.

The practice, which was working with London architecture firm Lifschutz Davidson Sandilands on the overhaul, first unveiled its transformation of Stamford Bridge in 2015 and was granted planning permission in 2017.

The project has faced a number of stumbling blocks. Just months before it was shelved in 2018, the local council had to step in to prevent a court injunction against the design after a group of locals claimed it would block natural light to their homes. 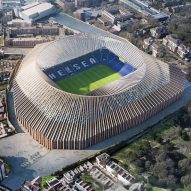 Stamford Bridge was completed in the London Borough of Hammersmith and Fulham by Scottish architect Archibald Leitch in 1876, and first used as an athletics club before becoming Chelsea's home ground in 1905.

The main aim of the renovation project was to increase spectator capacity from 41,837 to 60,000. A key feature of the proposal was the addition of 264 brick piers that would enclose the existing structure to create a covered walkway around its perimeter.

The brickwork, which was intended to reference local architecture, would have supported a steel ring above the pitch, creating the necessary room for extra stands as well as a shop, museum and restaurant.

Herzog & de Meuron was founded in Basel, Switzerland in 1978 by Jacques Herzog and Pierre de Meuron. Its recent projects have included a motorway chapel.

This is not the first time that the firm's projects have faced hurdles. Its Tour Triangle skyscraper, which is set to be built in Paris,  passed a final legal hurdle last year. Once completed, it will mark the city's tallest skyscraper.

Tate Modern's Herzog & de Meuron-designed extension in London was also the subject of another legal battle when residents of nearby Neo Bankside said gallery visitors were spying on them from the Viewing Platform.

The case was thrown out in 2019 by a high court judge, who suggested that the residents could take measures to protect their own privacy, including installing net curtains.