Moxon Architects has restored and converted a listed building and a former police station in Fraserburgh, Scotland, adding a contemporary extension clad in weathering steel.

Two civic buildings – the Category B-listed Fraserburgh Town House and a derelict police station – have been turned into one facility that serves as the headquarters for Aberdeenshire Council.

Weathering steel was chosen for its associations with the harbour of this port town.

"The aim of this project was to deliver economic, social and physical regeneration outcomes in an area that suffers from high levels of deprivation and disadvantage," Aberdeenshire Council planning service manager Maureen Corley said.

Moxon Architects, which has offices in London and Highland Aberdeenshire, used corten steel to create an extension that connects the renovated buildings.

Set back from the east gable and indented to the rear, it ties the Town House and police station together.

The new structure was constructed using weathering steel and curtain walling. Perforations cut from the steel sheets allow views through to the original masonry.

Its glass front reveals the facade of the existing building that forms the inner wall of the extension.

"The steel clad extension is intended to be understood as a durable but largely permeable structure set against the massive construction typology of the existing buildings," Moxon Architects managing director Ben Addy said.

"Weathering steel, suitably pre-oxidised, was attractive to us to provide that visual counterpoint," he added.

"At a basic level we really like the material and there is a beautiful serendipity in the effects of streaking in the pre-patination process and how that has translated onto the façade of the completed building." 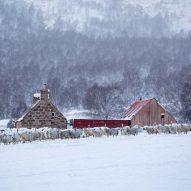 The apertures in the steel widen next to the stair flights and landings to allow framed views out to Kinnaird Head Lighthouse and the fishing port, and were designed to reference the surrounding environment.

"The pattern takes cues from the spacing of astragals on the adjacent stained-glass windows; ship gratings in the harbour; and the weave of fishing nets and textiles," Addy explained.

While it is invisible from the front of the existing buildings, the rear extension nevertheless serves as a new "front of house" for all council services and offers access to all levels.

It also contains and distributes a low carbon air source heating system for the entire building.

As well as meeting accommodation for the public and council use, the extension has a range of supporting facilities that relieve pressure on the existing buildings.

"The extension addresses both the harbour area that can be seen from the top of the building; providing a direct material reference in terms of colour, texture and pattern to the defining industry of the town; and the public housing of North Braeheads for which it provides a newly active frontage," Addy said. 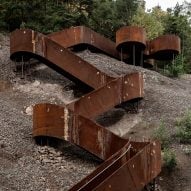 Moxon Architects also renovated the Thomas Mackenzie-designed Town House from 1853 and expanded it into the adjacent police station.

The Town House is made from sandstone, an unusual material for a civic building in the town.

"Intended as a demonstration of refinement and permitting a finer grain of modelling than the granite employed on the adjacent police station, the sandstone has nevertheless fared badly in the coastal environment, with many of the mouldings having lost definition over the course of the last century and a half," Addy said.

Matching stone from the Spynie Quarry in Elgin was used to replace the worst affected sandstone blocks, which were catalogued and drawn.

The building's interior was repaired where possible and stripped back to the masonry where compromised beyond salvage, and finished in white to emphasise both the restored mouldings and the original patterned lincrusta wall coverings.

"The restoration work secures the future of two listed buildings, one of which had been empty and boarded up for several years, and the other much underused and in need of modernisation," Addy said.

The combined complex has been named the Faithlie Centre, after Fraserburgh's original Scots name.

Moxon Architects' previous projects in Scotland include a humble cabin in a mountainous landscape. The studio has also added a red metal and larch extension to a Highlands farmhouse.