UK studio Curl la Tourelle Head has designed a concept for tent classrooms that would allow students to return to schools while maintaining social distancing guidelines.

"We designed the concept to assist pupils and staff with their return to school and to mitigate the possibility of infection by proper spacing of pupils and staff in fresh air environments," explained Wayne Head, director of Curl la Tourelle Head.

The concept would see tents being assembled on the school's playing fields or other nearby outdoor spaces. Inside, classrooms would be arranged so that pupils can be separated from each other by two metres.

Each would be configured for the various set-ups required by the school, while some would contain dedicated handwashing stations.

Curl la Tourelle Head believes that the concept, which is illustrated at a school in London above, could allow for a greater number of students to safely return to schools. 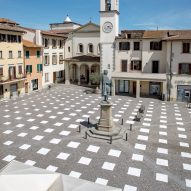 "At the moment only children in nursery, reception, year 1 and year 6, alongside priority groups may return in June," explained Head. "This is most likely due to the difficulties schools will face in enabling adequate safe spacing of pupils as they circulate."

"The additional outdoor structures would enable pupils and staff to be better spaced and this increase the possibility of year group intake," he continued.

The studio envisions that the tents would be used alongside the school's existing buildings that would also be adapted to allow for safe teaching.

"Our studies have shown that in utilising some outdoor structures to ease the load on circulation and teaching areas in main school buildings, that a quantum of temporary works could be undertaken to adapt and remodel existing school structures to more suitable Covid-19 compliant arrangements," explained Head.

The concept was developed after Curl la Tourelle Head saw makeshift tents being used by some nurseries in Denmark. It would make use of tents and marquees that would normally be in use at festivals and other outdoor events currently not taking place.

Head believes that the concept designed for coronavirus social distancing could potentially lead to a wider rethink of the classroom and school design.

"It is possible that schools may adopt and evolve the concept of outdoor schooling," he said.

"Other countries including Denmark are experimenting with new models of outdoor learning," he continued. "We believe that our emergency first step proposal will lead to new settings for learning environments and a much needed rethink of school planning."

As countries begin to reopen following lockdown, designers are creating concepts to allow people to carry out activities while social distancing. Aviation consultancy Factorydesign has designed a screen to allow social distancing to be achieved on planes, while Paul Cocksedge designed a blanket to let people "socialise safely and confidently" outdoors.

In Italy, Caret Studio has installed a gridded installation in a piazza to encourage social distancing.