Waves of corrugated steel and wood accents wrap around the Marginal Housing 3.0 block by Merge Architects located alongside Boston's harbour.

The housing complex contains seven units, two duplexes facing the street, two flats in the middle and three townhouses at the rear of the plot.

Merge Architects used materials and geometric shapes that were informed by its site located next to the harbour's shipyard.

"The shape, texture, and materials of Marginal Housing 3.0 poetically mirror the disparate elements of the site: the steel of the industrial shipyard structures to the west, the texture of the clapboard on east Boston's triple deckers, and the curvatures found in the barges and sailboats that step away into the Harbor," said the studio.

The residential building's facades are clad with a dark bronze-coloured corrugated steel. The fluted metal covers the triangular balconies that protrude from the front duplexes and wraps around the curving facade located on the building's east side.

Slabs of cedar form a base upon which the steel structure sits. The cedar contrasts against the dark siding to also frame the window surrounds, doorways and decks.

All seven units are contained within the same building. The front part of the block comprises the two duplexes, the flats each occupy a floor in the middle and the three townhouses take up the rear of the building.

Each of the residential units has an exterior space that provides views of the nearby water and boatyard. This is achieved in the middle units with the implementation of the curved facade that is designed to broaden the building's shape towards its back. 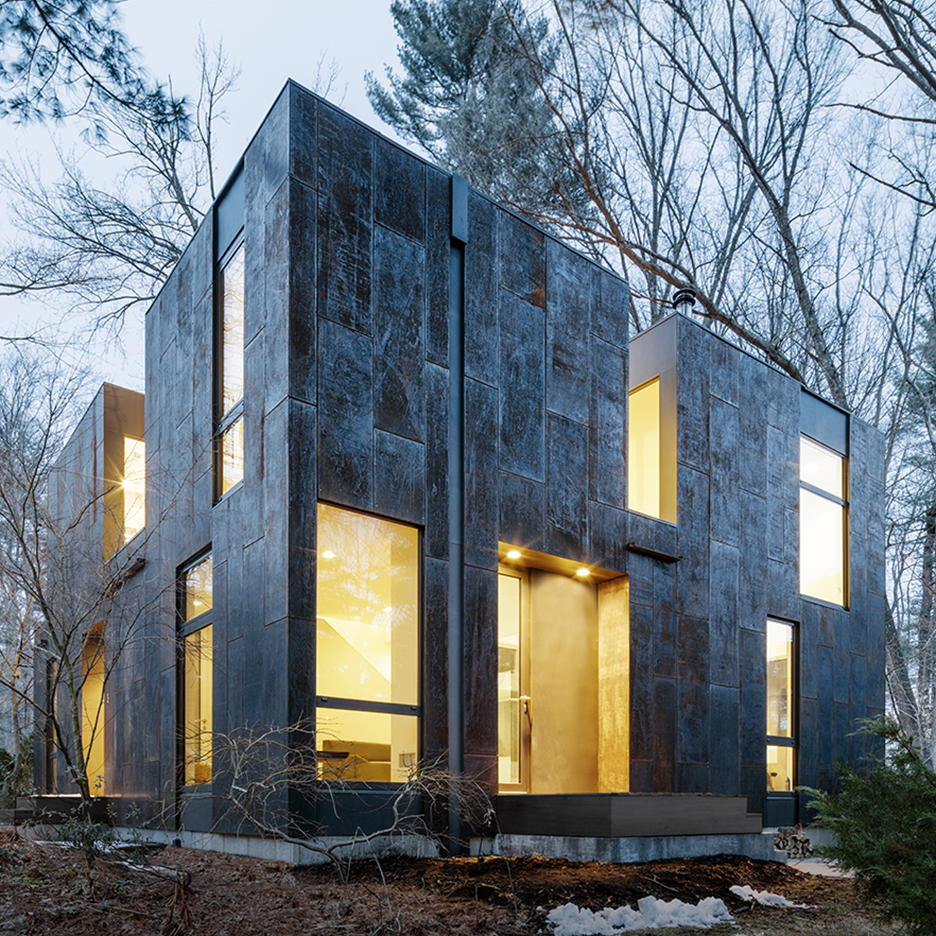 The two duplexes are oriented at slight angles from one another to create privacy on their porches, while the townhouses open up to a landscaped backyard that encircles the property.

Entrances to the individual townhouses are located on the ground floor along with a large parking garage, storage area and staircases to the duplex and apartments.

Marginal Housing 3.0 was completed in late 2019. The team were unable to take photographs of the interiors because of limited access due to the coronavirus pandemic.

Where the exterior walls are convex the corresponding interior walls are concave creating a relationship between the two sides. The open-plan residences use the rounded walls to form small living niches. Simple materials including oak wood floors feature throughout the spaces.

The building is located on a Federal Emergency Management Agency (FEMA) flood plain that backs up to waterfront, as it is an area the city believes could be affected by rising sea levels.

In 2018 Boston unveiled its Resilient Boston Harbor plan to protect the local infrastructure from flooding.

Merge Architects is a Boston architecture studio founded and led by principal Elizabeth Whittaker. In 2016 the studio completed a house outside of Boston clad with pre-rusted steel.

Photography is by John Horner.