In our final lecture as part of Virtual Design Festival's collaboration with Architects, not Architecture, Dutch architect Francine Houben talks about her influences and the founding of Mecanoo.

The Architects, not Architecture talks give well-known architects a chance to discuss how they got where they are today. For Houben, it started with a childhood of constant moving around, as her father worked in the Dutch coal industry.

"We were always kind of living on buildings plots because we were moving so often, and for me it was really inspirational," the architect said. "Even experiencing the different landscapes."

This has stayed with her, she explained. "I'm now living in Rotterdam and since that's a flat landscape, I call the buildings the Dutch mountains."

Houben studied at TU Delft where she met fellow students Henk Döll and Roelf Steenhuis, with whom she won an architecture competition and founded architecture studio Mecanoo in 1984.

"I always have to explain to my students nowadays that we already had an office before we finished school or even became architects," she said. "I think that's almost not possible anymore."

Travel played a big part in the life of the architect, who regularly went to the US to visit Charles and Ray Eames after meeting the designers through professor Max Risselada at TU Delft.

"For me Charles and Ray Eames were extremely important," she said. "As an attitude, how you enjoy working, how you make compositions. A kind of timeless architecture." 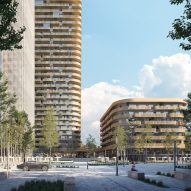 Being invited to take part in an exhibition for the Sao Paulo Biennial in 1999 also helped shape her practice.

"Being in Brazil and seeing the work of Lina Bo Bardi was like coming home for me," Houben said. "Imagine, she is an Italian architect, she moved to Brazil and started to make work that was inspired by local people."

"And she made it for local people, with local people. That might be my feeling of coming home," she added. "That maybe has to do with me having moved so many times in my life, adjusting and trying to understand what kind of people you're working with."

Houben also found inspiration outside of the architecture world. "What was important for me was getting in touch with the theatre world," she explained.

Her husband, Hans Andersson, was connected to the avant-garde theatre world and Houben became fascinated with stage design.

"I just have to tell you, avant garde means no money," she said. "So, how to find the right ingredients to do the right thing for these people? I learned a lot from them. It's about colour, about light."

For Mecanoo's conversion of an old Lutheran church into a theatre for an avant garde-company, Houben ended up using stage paint.

In the lecture Houben also speaks of working in Washington, DC on the Mies van der Rohe-designed Martin Luther King Jr Memorial Library, which she sees as one of her most fascinating projects.

"Because you have to be aware, it's a building by Mies van der Rohe," Houben said. "And of course, as an architect working on Mies van der Rohe, who's a god, named after Martin Luther King, who is also a god, to make it the library of the future – how do you deal with these two men watching over my shoulder what I'm doing?"

Recent projects by Mecanoo include a homestead with a hidden corridor and a giant red cultural centre in China.

Architects, not Architecture is a lecture series founded by Fermin Tribaldos and Irene Osei-Poku in 2015 in Hamburg, Germany. For each event they invite three well-known architects who, instead of talking about their award-winning international projects, are asked to talk about themselves.

As a consequence of Covid-19, Architects, not Architecture has introduced its Home Edition 2020, which sees it open up its archive of full-length talks, which have never been published before and includes talks from Reiulf Ramstad, Francine Houben, Daniel Libeskind, Tatiana Bilbao, Peter Cook, Richard Rogers, Massimiliano Fuksas, Ben van Berkel, and others.

Virtual Design Festival is the world's first online design festival, taking place from 15 April to 30 June. For more information, or to be added to the mailing list, contact us at virtualdesignfestival@dezeen.com