Based in London and Amsterdam, Studio ThusThat is led by three Innovation Design Engineering graduates from the Royal College of Art and Imperial College London.

It exists to improve the understanding of materials in a world of finite resources and demonstrate the potential of waste materials.

"The materials in our everyday lives are much more complex than they initially seem," explained the studio. "Each one has myriad places of origin, complex processes, and many different uses that make up its narrative."

"But every material comes at a cost; vast quantities of byproducts and wastes are left in its wake before it ever reaches your hands," the studio added.

"Studio ThusThat aims to overturn how we understand our material world by uncovering their hidden backstories, digging into their origins, and exploring that which was left behind as waste."

The key to Studio ThusThat's design process is immersive research, which it conducts through collaborating with scientists and various material experts from around the world. This enables it to work with many unknown materials that are often limited to scientific study.

"It's important to not stay confined to the design bubble," explained said Kevin Rouff, a member of Studio ThusThat. "We need to get out of the lab, away from the desk, and out of the workshop to move more fluidly."

A project by the studio that demonstrates this concept is the From Wasteland to Living Room series, which explores the potential of industrial waste from the mining and metallurgical sectors.

The first part of the series, Red, investigates the potential of bauxite residue, which is a byproduct of the aluminium industry otherwise known as red mud.

As part of the investigation, the studio worked with factories and research labs such as Grymsdyke Farm to use red mud to create a collection of ceramics and glazes. The aim was to invite people to question the notion of waste and demonstrate the value of secondary materials by providing them with a new aesthetic.

It is now continuing its exploration of red mud and collaborating with mining companies such as Rio Tinto to find real world applications for the material. 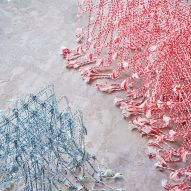 Eight designs that make use of waste products

The second part of the From Wasteland to Living Room series is This is Copper, which explores the transformation of slag – a waste product of copper mining – into a cement alternative called a geopolymer. Geopolymers have a significantly smaller carbon footprint than standard cement but offer the same structural performance.

The project was conducted by Studio ThusThat in collaboration with a copper recycling factory and material scientists from KU Leuven in Belgium and resulted in a collection of chairs, tables, lamps, tiles that showcase the limits of the medium.

"In a way, we are constantly reinterpreting the designer's role within the systems that already exist around a material," said Studio ThusThat's Paco Böckelmann.

Rouff concluded: "Ultimately, we try to balance between revealing a hidden story and telling a new one through the objects we make. It's as much about critiquing, as it is about suggesting a possible alternative."