The Sidewalk Toronto smart city was scuppered by a combination of local opposition, excessive secrecy and the prioritisation of profit and technology over sustainability and community, according to architect Ben van Berkel.

Speaking to Dezeen in a live interview for Virtual Design Festival earlier this week, the UNStudio co-founder said that the project, led by Alphabet subsidiary Sidewalk Labs, focused too much on commercialising data and too little on community engagement and environmental issues.

The project was scrapped last week, with Sidewalk Labs blaming the coronavirus pandemic for the decision.

"That project in Toronto, of course, we studied endlessly," said van Berkel, who is developing Brainport Smart District, a smart neighbourhood in Helmond in the Netherlands.

"It was all about the commercial use"

"And we've talked to the parties who were involved there," he said. "The problem there was that it was too much oriented towards efficiency, such as who is shopping where in the neighbourhood."

"It was all about the commercial use," he added. "It was not dealing with the real important, urgent topics of today like sustainability and community-building."

Launched in 2017, the Sidewalk Toronto project initially aimed to transform a 324-hectare site into a high-tech urban district. The project was subsequently scaled down to just 4.8 hectares.

Architects involved in the project included Heatherwick Studio and Snøhetta, who developed timber buildings for the site, and Partisans, which worked on a "raincoat" concept to shield pedestrians from the elements.

"As unprecedented economic uncertainty has set in around the world and in the Toronto real estate market, it has become too difficult to make the 12-acre project financially viable without sacrificing core parts of the plan we had developed together with Waterfront Toronto to build a truly inclusive, sustainable community," Doctoroff wrote.

"And so, after a great deal of deliberation, we concluded that it no longer made sense to proceed with the Quayside project, and let Waterfront Toronto know yesterday."

However, many observers felt that the pandemic was not the real reason why the project was pulled.

"They had problems particularly with the neighbours," van Berkel said. "The people really hated it. You know, this was already the case a year ago, two years ago, that they started to complain."

Van Berkel said that architects involved in Sidewalk Toronto were not allowed to speak publicly about the project, which he said was unusual for a large urban regeneration project that requires openness and community engagement.

"I know some of the architects... I'm not allowed to mention them because they were assigned all kinds of complex contracts," van Berkel said. "But I already felt then that it was weird that they had, you know, 10 architects working on it who were not allowed to talk about it. It didn't feel good." 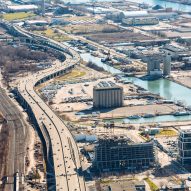 UNStudio took a close interest in the Toronto project as it was simultaneously developing its own "smart neighbourhood" in Helmond.

Work has already started on the 150-hectare Brainport Smart District site, which will eventually feature 1,500 homes set amid shared gardens where food will be grown. Designed along circular principles, the development will feature advanced technology to monitor everything from energy use to waste management.

UNStudio smart neighbourhood will be about "community-building and people"

UNStudio has worked with data-security specialists to ensure the information is secure and cannot be exploited by third parties, van Berkel said.

"We worked endlessly with specialists, even cyber-technology specialists who gave us the security. There are endless reports to make sure that the data shared there is kept within the owners of the neighbourhood so that it is not shared with any large company outside that neighbourhood."

"And, of course, people can decide to be part of that digital community [or not]."

As the first development of its kind in the Netherlands, Brainport Smart District required careful community consultation, van Berkel said. "We had major questions and front-page criticism in the beginning," he said.