Today VDF teams up with musician Rosey Chan, starting with this exclusive premiere of her collaboration with artist Eyal Gever and dancer and choreographer Sharon Eyal. Plus Chan launches a playlist of compositions intended to help listeners to cope with coronavirus lockdown.

Water Dancer was originally created as part of a series of six representations of human movement created for an exhibition held at Alon Segev Gallery in Tel Aviv last autumn.

The version shown here features new music specially composed by Chan for her collaboration with VDF. The new soundtrack is an electronic piece called Zelenka.

One of six compositions for video art show

Chan, a London-based composer, musician and artist, wrote the music for all six pieces. Conceived by Israeli artist Eyal Gever, the pieces were choreographed by Israeli choreographer and dancer Eyal.

Water Dancer, a short preview of which is shown above, is being premiered today on Chan's YouTube channel.

"It's based on choreography and dance, fused by a futuristic animation," said Chan. "As is often the case, someone will come to me with a finished idea and the collaboration will involve creating music to enhance and transform this finished object or animation."

"A matter of trial and error"

"This was really a matter of trial and error of trying different kinds of music, and every piece of music I tried with this animation had some emotional result," she added.

The six pieces were originally shown on screens in the Tel Aviv gallery in a show that ran from 5 September to 1 November 2019.

"These moving images all function within a modestly pixelated realm which uses low resolution LED screens," said Alon Segev Gallery. "Contrary to the high resolution, oversaturated world in which we usually operate in, the finer details of the highly sophisticated simulations have been stripped away."

Collaborations with architects and designers

Born in the UK to Chinese parents, Chan studied a piano scholarship at the Royal Academy of Music in London before attending the Royal College of Music, where she trained in composition, piano and violin.

Besides composing and performing, she collaborates with a wide range of artists, designers and architects. 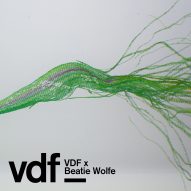 From Green to Red is "part music video, part protest song and entirely a statement of our time" says Beatie Wolfe

Today's VDF x Rosey Chan collaboration will highlight some of these projects, including works with architect Patrik Schumacher and designers Fredrikson Stallard.

"Like most musicians, I've been recording and playing a lot of music during isolation," Chan told Dezeen. "It's been especially interesting to get feedback during the process of composing."

"I've been putting thirty-second clips of new music on to Instagram and then reading the responses," she added. "It's been intriguing to see the contrast between the different pieces that have had good responses. It's not just one thing or one style - and you realise that a lot of people are listening to things in their own personal way."

Tracks are a response to isolation

This feedback has informed her creative process, she said, and was the inspiration behind the Mindful Music playlist.

"You could say that learning what people like, what touches them emotionally, what speaks to them at this time (which is very difficult and very personal for everybody), allowed me create my own personal algorithm," she explained.

"There's been a certain universality in responses, and I think that has definitely steered the way I've been extending these compositions/improvisations," Chan added.

"So I think these tracks are very much the result of myself in isolation in response to other people in isolation, which is in itself, a replication of the relationship I would have with a live audience, except in a digital form. So the ongoing situation is fascinating and I will continue to explore in this way."